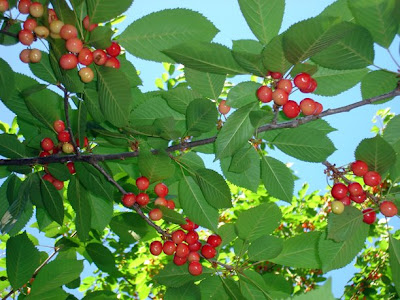 I was on the trail with Fred the other morning when I caught a fleeting glimpse of a small creature eyeing me through the thimbleberry bushes.

As it humped down the trail its black-streaked tail gave it away -- gray fox. Not a surprise.

Fred of course was oblivious until he stumbled into the fox's scent trail -- apparently it had been enjoying the company of a pile of horse pucky.

The chase was a short-lived phenomenon. Reynard abandoned the trail about 50 yards away and disappeared into the underbrush.

It was then that I noticed I was standing in a small thicket of wild cherry trees -- bitter cherries, Prunus emarginata, to be exact.

I hooked a limb with my stick, and was soon lost in a reverie of browsing -- the yellow and red fruit were highly edible, and Fred whined for me to share the fare.

Well, let me just say that I developed a powerful craving for bitter cherry sauce on vanilla ice cream.

The next day I picked a half gallon of the seductive fruits, and the redhead pitted the batch and cooked it into bitter cherry syrup.

It's a good excuse to eat ice cream and completely nullifies the effects of all that cholesterol. 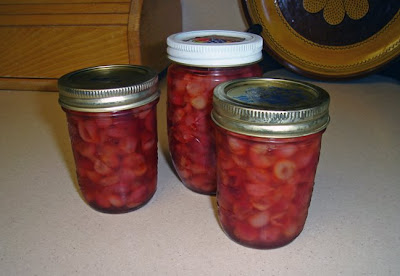 Any excuse to eat ice cream is a good one for me!

Nothing tastes half so good as that you've foraged for yourself.

I bet your cherry sauce tastes really good because you picked all those cherries yourself.

Are those the same as choke cherries? Choke cherry syrup on blue corn pancakes is a must have breakfast in New Mexico.

Kirby, chokecherries are a different species and not as sweet tasting in my experience. But once upon a time I made chokecherry wine, and it was A-OK.

Oops! I just posted a comment in the wrong spot--sorry 'bout that!
Meant to be under this Cherry Blog--I doubt picking berries has much to do with Tails.