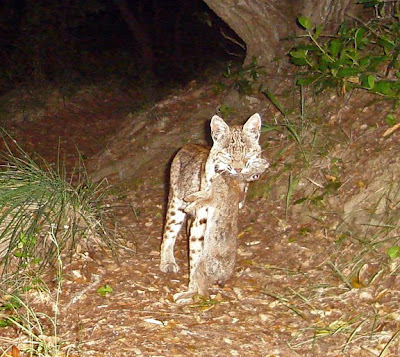 The young bobcat caught the brush rabbit on the evening of June 11.

I couldn't see the rabbit when I scoped the pictures on the camera's LCD the other day, but there was no mistaking it as a rare event when I saw it on the computer screen this evening.

I think the dead rabbit is the same one the cameras photographed between May 31 and the morning of June 9. (I have three cameras on this trail.)

No bunny however was photographed after June 11 and until I checked the cameras on June 30.

The rabbit had the habit of loafing on the trail. I got multiple images of it. 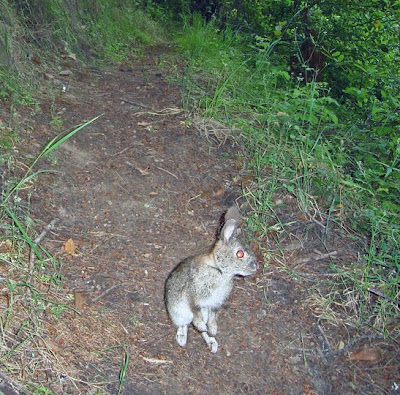 This trail seems to be on the cat's regular beat. 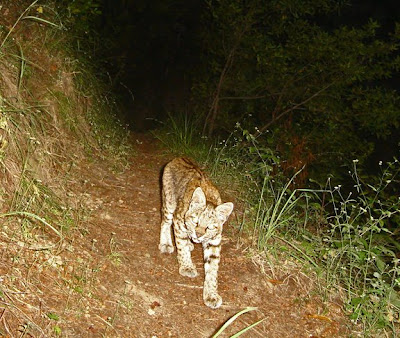 Between June 10 and June 23 the cameras photographed the same cat on 5 occasions.

Look at the it's right foreleg and you will recognize a distinctive broken band of dark fur. 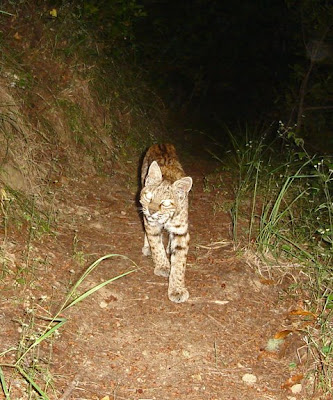 It's the same in all photos, except the one with the dangling rabbit. 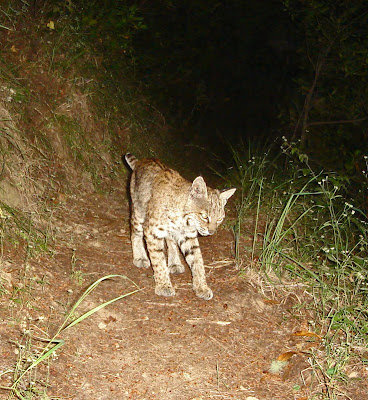 My guess is that the hunter is the same skinny bobcat seen in the other pictures -- a young adult probably from last year's litter.
Posted by Camera Trap Codger at 9:22 PM

Man that is cool!

And that bunny learned (the hard way) what all youngsters should know- don't play in the road.

Amazing CTC! That photo was way out there on the bell curve. Congratulations. One fine dinner for a skinny cat.

To catch a bobcat on a cam is cool enough, but to get one with its dinner in its mouth is priceless!

Congrats! What a photo. I wish we had bobcats here.

etNice catch on the bobcat finding a meal and a head on pic at that, well done.

I compared the two cats and I think it's a different cat.

That is a great reward for all of your patience and hours of trapping.
Good work!

I think you are right, Cliff. The cat with the bunny looks different from the other one, and I can't match the markings on the right leg.

That is a very nice series of bobcat images.