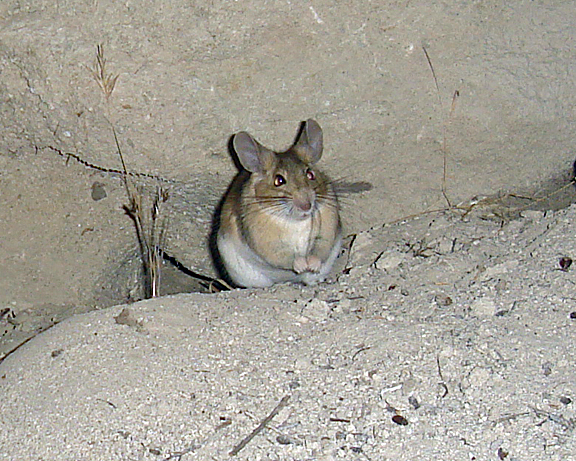 Pigeon holing your wood rats isn't as easy as it used to be.

We can thank molecular biology for that.

As a result of recent investigations using traditional morphometric and molecular methods there are more species of wood rats than there were a couple decades ago, which is a good thing.

So here is Bryant's wood rat, which rendezvous'd with the other rodents at Badger Head Gulch.

It used to be called the desert wood rat (Neotoma lepida), which is the smallish and generally fair-haired wood rat of the greater southwest.

Professor Patton and his colleagues at UC's Museum of Vertebrate Zoology in Berkeley painstakingly revised the desert wood rats, and showed that the California populations deserve recognition as a separate species. 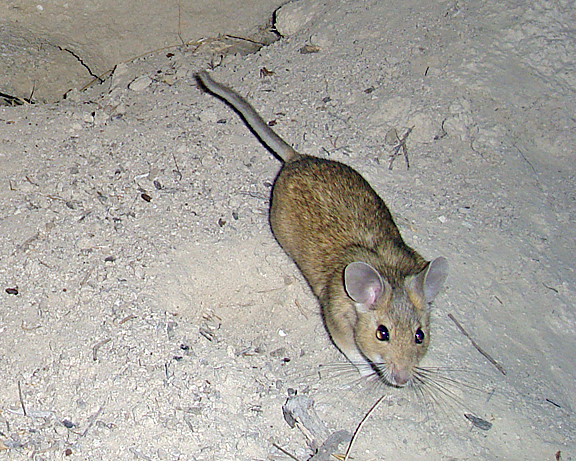 This is the first time we've photographed the species at Chimineas.

The mouse below,  however is in all probability the Tulare grasshopper mouse (Onychomys torridus tularensis).

It's hard to confuse this little snub-nosed predator with anything else in the area.

And for those of you who prefer birds to rodents we have the California towhee, which seemed to be drawn to the burrow.

Love the rodents. You got some great shots there.

Do you think they might be attracted to the seeds/insects that blow into (and collect in) the hole?

I appreciate the work taxonomists do to classify species. Sometimes people forget that the 'species concept' is to some extend a human invention ;) I think knowing where to draw the line between some species can be very difficult.

My only concern is that, with identity crises' so common in our world/time, I hope that these rodents can embrace and make the best of their new found identity...

Nice to see these little guys just going about their business instead of being dumped out of a cage or in a snap trap.

Also glad to hear Dr. Patton is still going strong. He's got to have been at mvz at least forty years now.