The mouth of Badger Head Gulch was a broad dry-wash with a sandstone bank, and in that bank we found a burrow large enough to be a carnivore den. 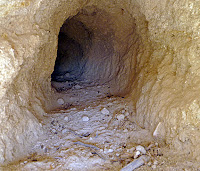 Since Fred kept coming back to sniff the burrow, it became camera trap set 393.

The camera snapped 155 pictures during the next 42 days of August and September, and the site was bustling with rodent activity.
Four species.
I am not sure what the attraction of the site was to these rodents, but not a single carnivore made an appearance.

Heermann's kangaroos rats were the most common visitors.


Some of them were juveniles.


You can tell them from adults by their fetching, sleek, big-eyed looks. Very cute.


The California pocket mouse was the other heteromyid rodent that visited the site, and though it is widespread at Chinineas, it was infrequently seen at this site.

Posted by Camera Trap Codger at 9:45 AM

"I am not sure what the attraction of the site was to these rodents, but not a single carnivore made an appearance."

By Jove, you got it.

Is there something wrong with the adult kangaroo rat's ear?

Were they possibly coming to get salt left over from urine deposits? Or maybe looking for bones to chew for their calcium content?