A fisher stopped by the other day

Long ago when the Earth was wintry and game was scarce,  fisher summoned his friends to break into Skyland.

Only wolverine had the brawn to tear the sky open, and through the hole warmth and birds swept down on the frozen earth below.


The intrusion so displeased the Sky People that they shot fisher with bow and arrow.


But as fisher was dying they realized the great hunter from Earth, fisher, was a good guy looking out for his friends.


So the Great Spirit took pity, nursed fisher's wounds, and hung him in the sky.


The next time you gaze at the Big Dipper, remember that you are also looking at fisher.

I was blithely basking in January's seductive weather, occupying myself with dog-outings and garage projects, when my thoughts drifted to Humbolt's redwoods and a sobering vision assaulted my reverie.

I saw my stoic sentinels, the clear-eyed cameras of November past, listing on their posts, draped in soggy spider webs, and speckled with splash-dirt.

I saw a prostrate camera -- disemboweled and filled with water.

This worrisome vision ignited a burning flame under the codger's skinny butt.

The cams had been there for over two months, and soon the long-overdue storm would dump its Pacific payload and close Rt 299 through the Trinity Alps.

The cams could be stranded for another month or two, or an impatient codger could get marooned in Sasquatch country.

I emailed Lowell and Terry, got the green light for a visit, and a few days later did the 5-hour drive.

The next day we checked and serviced the cams which were indeed draped with spider webs, and at the end of the day we viewed the pixeled fisher -- ah, the sweet thrill of camera trap victory.

Upon checking the EXIF data, we found the road-killed squirrel had cured for a month before fisher scented the delicacy just before noon on a sunny December day.

It groomed a bit before digging in,


then ate at a leisurely pace. 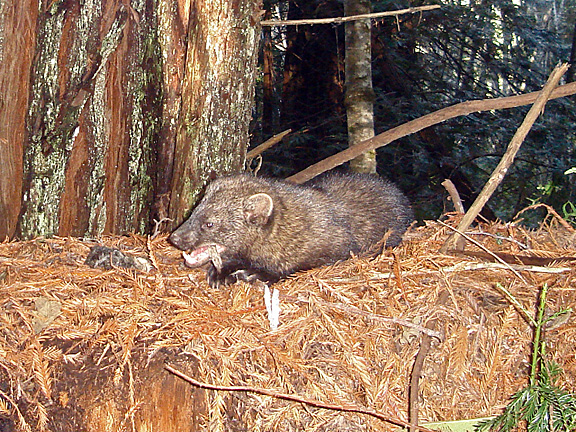 It finished in 10 minutes, and the cam captured 31 photos.

There were enough images to see that this fisher has a white spot on the underside of its right wrist, which means we may be able to recognize it in the future.

I have now cam-trapped all but two of California's slinky mustelids -- northern otter, mink, short-tailed and long-tailed weasels, badger, American marten, and fisher.

I'm not after the sea otter, nor the state of California's only wolverine.

If I camtrapped the wolverine, however, I could boast a Grand Slam of the golden state's terrestrial mustelids.

Does anyone know the whereabouts of Buddy the bachelor wolverine this winter?
Posted by Camera Trap Codger at 7:15 PM

Beautiful! A new, near-impossible to find species, in perfect poses, and with a series of photos of eating behavior - you set a tough standard, Codge!

It's hard to believe that such creatures are even real. What wonderful photos. Congratulations from me as well.

Great shots! Still crossing my fingers and waiting to see one.

I am impressed. Great shots. Congratulations on such wonderful pictures.

I was privileged to be with you when you realized that you got the prize! Like winning the lottery!
You are good mann!

I just had my first experience with a fisher, although dead, it was beautiful. Where I live in NY, they are few and far between and not huntable or trappable. BUT last weekend I was at a fur auction, and someone who had trapped in another region of the state brought in 2 fisher and 2 river otter. Beautiful, majestic slinky mustelids. Weasels are awesome!

Nice shots Chris. i recall seeing one in Oregon in the deep dark past.
D

My wife still maintains that she saw a fisher in thick woods near our house six years ago. Other friends insist that it was a big pine marten. (Fishers are not supposed to be rare or missing in Colorado.) So if I could get a picture like this ...

dude....this whole site amazes me. I just started a camera trap project in the hills of Beverly Hills - bobcats, deer, owls, random birds of prey - but you have got my mind thinking about all kinds of diff stuff!

thanks for all your hard work and SHARING your techniques.

Fabulous. Keep it up. Congratulations on the fisher!