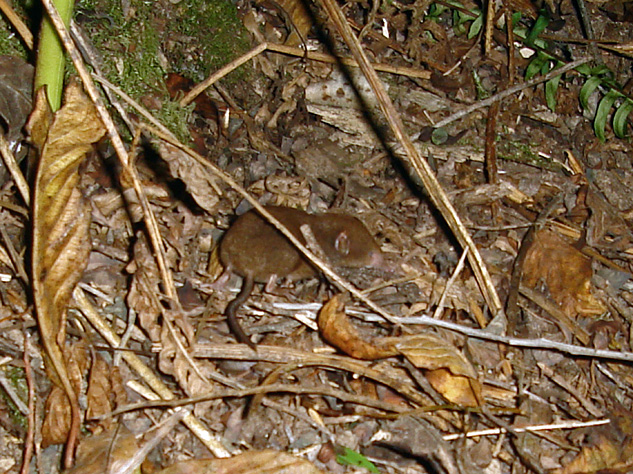 Set 587 was in a thicket of ceanothus and sword fern, on a steep logged hillside, riddled with mountain beaver burrows.

I think you know what I was expecting.

No mountain beaver waddled into the camera's view, but a bear left one picture, 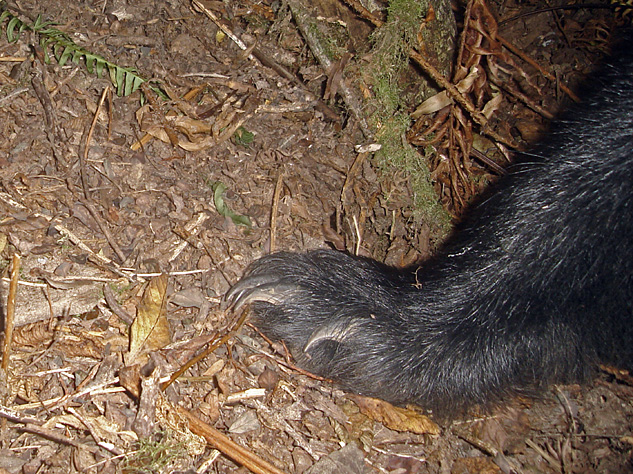 The picture of its paw didn't tickle my curiosity to surf the web for information on ursid foot anatomy.

There were many photos of a fox sparrow scratching for insects and seeds. No surprises there. 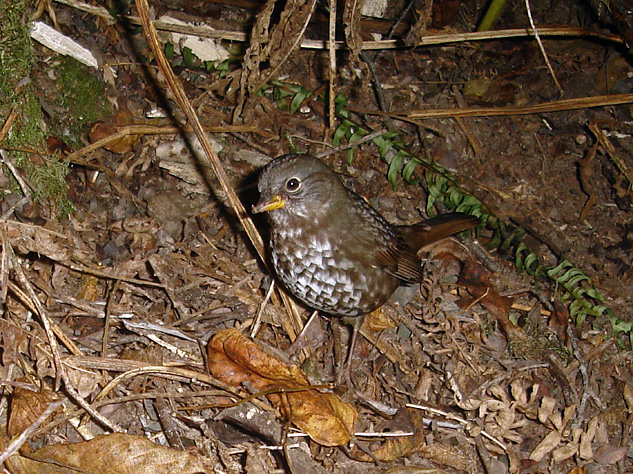 The critter at the top of the page was too small to see on the camera's LCD, but when I uploaded the photos at Terry's house I saw something unusual -- a large cinnamon-colored shrew.

I pulled a copy of Jameson and Peeter's California Mammals  (the first edition) from my friend's bookcase, and gleefully discovered that I had camera-trapped my 6th species of shrew -- Sorex pacificus -- Cowabunga!

I celebrated with my friends that night -- two beers and a Mexican dinner.

At home a couple days later I looked up the shrew in my own copy of Jameson and Peeters, the 2004 edition.

A taxonomist had put to rest northern California's  cinnamon-colored shrew known as Sorex pacificus and reincarnated it as Sorex sonomae, the fog shrew.

This had taken place sometime between the two editions of the field guide.

My list of camera trapped shrews was back to 5 species.

Sorex sonomae has been caught up in an ongoing cycle of taxonomic death and reincarnation.

Recognizing its scientific value, he sent it to the Smithsonian Institution where it was safely stored with other stuffed shrews and their skulls.

Some 30 years later (1877) it caught the interest of the bearded surgeon-naturalist Elliott Coues who described it as a new species, Sorex pacificus.

In 1895 the naturalist-Oregonian, B.J.Bretherton collected another large reddish-colored shrew from Yaquina Bay, less than 50 miles from the type locality of Sorex pacificus.

The man who was to describe it as a new species, Hartley H.T. Jackson was 4-years old at the time.

That year C. Hart Merriam,  Chief of the USDA's Division of Ornithology and Mammalogy, was wrapping up his synopsis of long-tailed shrews.

It was based on 1200 specimens from all over the country, and he boiled them down to 41 species and subspecies.

In this work he declared that "the multiplication of closely related forms has been avoided".

"Sorex pacificus", he wrote, "stands alone and does not require comparison with any other species, its great size and peculiar cinnamon-rufous color serving to distinguish it at sight."

He classified all the big cinnamon-colored shrews of the west coast as pacificus, including Bretherton's Yaquina shrew and the other 12 specimens collected as far away as Point Reyes, California.

And so it was for the next two decades.  Then the 27-year-old Jackson decided that Bretherton's specimen deserved recognition as a distinct species.

He named it Sorex yaquinae, and embarked on a 10-year meditation on the relationships of the long-tailed shrews.

In his A taxonomic review of the American Long-tailed Shrews in 1928 he concluded that the Yaquina shrew was only a subspecies of Sorex pacificus.

He also described another large species of shrew that had been collected from the bank of the Gualala River in Sonoma County, California, which he named Sorex sonomae.

Sorex pacificus yaquinae and Sorex sonomae remained apart taxonomically for 30 years, but a great deal of "new material" (additional specimens) had accumulated in the meantime.

There were 3,465 specimens to examine when a University of Kansas Ph. D. student named James Findley decided to make sense of the highly variable wandering shrew (Sorex vagrans) .

He noted that the long-tailed shrews are morphologically uniform, that cranial proportions vary allometrically with body size, and concluded that body size and color are the only differences of taxonomic significance.

He then went on to revamp a large number of named forms as wandering shrews, Sorex vagrans, including yaquinae, pacificus and sonomae. The three big west coast shrews colored like dead conifer needles became subspecies of Sorex vagrans.

Findley's intriguing hypothesis was that wandering shrews were the personae dramatis in a Pleistocene epic of changing climate, landform, and habitat.

He viewed the Fog shrew (sonomae) and its look-alike relatives pacificus and yaquinae as oversized wandering shrews living in isolation on the frontier of the species geographic range.

Their differentiation from the parent stock had exceeded the possibilities of hybridization.

For 25 years the Fog shrew remained just an oversized wandering shrew, but the next players in the saga noted that, "Findley's revision was greeted cautiously by some".

The Pacific shrew and the Wandering shrew were alive and well in the pages of Lloyd Ingles' Mammals of the Pacific States published in 1965.
The new players in the saga, Darwen Hennings and Bob Hoffmann (1977) officially exhumed pacificus as a legitimate species, and recognized sonomae and yaquinae as subspecies.
Thirteen years later (1990), Leslie Carraway examined the specimens once again and elevated Sorex pacificus sonomae to a full species -- Sorex sonomae, and classified Humbolt County's cinnamon colored shrews (formerly pacificus) as the same.  Sorex yaquinae also got a makeover and became Sorex pacificus pacificus.

Not that you cared.
But the take home message for the naturalist blogger is this: use current field guides if you want to get the scientific names right.


(Thanks to Neil Woodman for guiding me to critical references, and to Kristen Bullard of Smithsonian Libraries for getting me PDFs of most of them.)

Leslie N. Carraway. 1990. A morphologic and morphometric analysis of the "Sorex vagrans species complex" in the Pacific Coast Region. Special Publications, The Museum, Texas Tech University 32:1-76. (NB: was unable to access this reference)

Hennings, D. and R.S. Hoffmann. 1977. A review of the taxonomy of the Sorex vagrans complex from western North America. Occasional Papers, Museum of Natural History of the University of Kansas, 68:1-35.

http://www.nps.gov/history/history/online_books/science/14/chap2.htm (NB: Interesting account of C. Hart Merriam by the Murie brothers)
Posted by Camera Trap Codger at 11:34 AM

you got me. I've always had interest in wildlife, but not to the extent of the mind of a biologist, scientist, brainiac as yourself...that's a compliment. VERY interesting. I still can learn a few things after all these years. Do stop by.
Blessings

But what the heck is that shrew doing? Perhaps that has something to do with its color and skull size but mostly I want to know how the heck it lives with such puny eyes.

The shrew discussion was interesting to me, but I really like the Fox Sparrow photo. Here in Alaska, most of our Fox Sparrows are very dusky like the individual in your photo, but occasionally we get the beautiful red morphs. Do you ever get red Fox Sparrows in your region?

Thank you Dar, and Cindy, they are insatiable little killers that use scent and sound to find their prey. Hard to say exactly what it is doing, but most likely it's foraging in the leaf litter.Chris Maser has some excellent first hand accounts of their skills in killing centipedes, millipedes, and other invertebrates in his book Mammals of the Pacific Northwest.
John, the red fox sparrows also winter along the California coast, and the SF Bay Area. They are lovely birds.