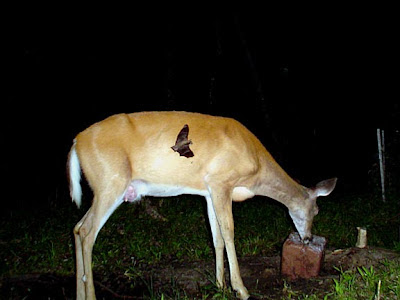 Willy4003, a serious recreational camera trapper from Floodwood, Minnesota got me to thinking about this when he posted recent photos of bats and deer on the Pixcontroller Forums, and he kindly gave me permission to post them here.

Willy's cam was set at "an established mineral lick surrounded by ash and spruce near a marshy lowlying area, hence the extensive mosquito population." His photos were taken between 9:28pm and 12:18am on June 16th, and July 6th and 7th.

I put the question to my old mammalogist buddy Don Wilson, who is a bat aficionado of the first order. He responded: "I haven't ever heard of anything like that. Seems especially unusual in Minnesota, where the species diversity of bats is low, and foliage gleaners are not at all common. Very interesting."

The term "foliage gleaner" (not yet in Wiktionary) refers to birds, bats, and insects that forage for insects in vegetation by hovering, swooping, darting, and diving at their prey.

Deer are powerful mosquito bait, and they also play into the life cycle of a number of other dipteran (fly) parasites, like nasal and skin bots. Biting flies and mosquitoes couldn't ask for a better host than a deer in summer, when the thin coat renders most of the body vulnerable to blood-suckers. This cropped photo shows the mossies tanking up, and judging from the red spots, this doe probably has an itchy udder. 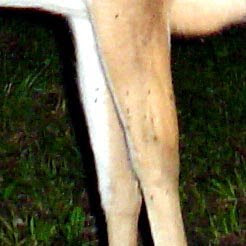 Of course, the bat-deer association could just be a coincidence. The bat might have just been flying by. But I have the feeling that if camera trappers had faster cameras, there might get a lot more pictures of bats and deer. 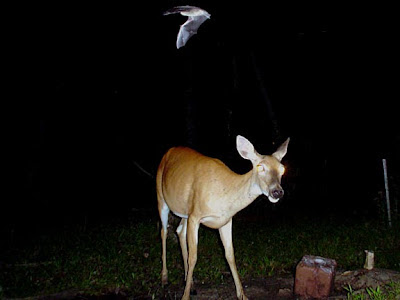 It goes to show, there's still plenty of natural history to be learned, and camera traps are a good way to do it. A hat tip to Willy 4003 for sharing this neat finding.
Posted by Camera Trap Codger at 10:57 AM

Fascinating. And a first step in the evolution of vampirism?

Right on, Hugh. That's coming, I hope -- still have to dig up some references. But what a pain having 4000 reprints in boxes in the garage.

Willy4003 got some incredible shots.
years ago while working for Donald Griffin i recall witnessing Myotis catching fruit flies, 2 flies in a second, photographically documented with strobe.The photos were taken by a colleague of Griffin's, Fred Webster***, at first to get the bats to catch mealworms shot from a small cannon. Later he devised a method to photograph them taking fruit flies.
What puzzles me is that the bat looks larger than Myotis -- it could be Eptesicus, which usually go for larger insects. The ears look too small for Plecotus.

***retired, made his money at the very beginning of computer discoveries in Chicago, a trampoline winner who built a humogous quonset hut in his backyard in Cambridge Mass. to study bats with LARGE FORMAT strobe cameras

It certainly makes sense that nighttime hunters would gravitate to where their prey hangs out. Sure wish there were swooping mosquito eating birds to hang out around me when I go visit Yosemite this coming week. I know the mosquitos will be bad. Interesting photos. I wonder if the deer avoid wet places when mosquitos are extremely bad or if their brains aren't smart enough for that.

Here's a related post about camtrap video of a parasite loaded tapir from Panama.
http://agoutienterprise.wordpress.com/2009/10/15/bci-tapirs-miss-the-good-old-days-at-the-coati-spa/