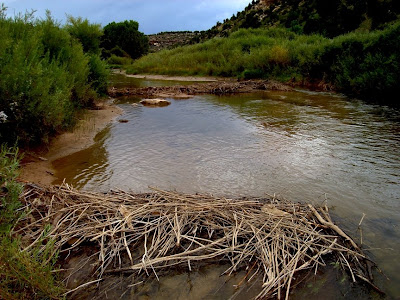 I staked the camera at the end of the dam where the water rushed through the gap. This is where I expected the action, but it was impossible to set the camera there. So I pointed it at the dam itself, thinking Bucky would waddle over the sticks to reach its construction site.

It was late afternoon, the mossies were thick, and Brian waited patiently as I went through the usual self-torment. Would the rodent amble across the dam, or would it swim to the gap? Would it incorporate the camera into the dam, as it apparently did with Brian's camera a couple years ago? And how often did it visit the dam? (I had only 4 days to get the picture). Or was it even here? Maybe it was working one of the less accessible dams on the Mora River.

I took a small bottle of birch oil from my pack -- this minty-smelling stuff IS improving the smell of that nasty sack -- and dipped two thin twigs into the bottle. I laid them on the dam at two points in front of the camera. Then I took a deep snort of the oil. Aroma therapy.

Well, at the end of the week I found that it worked. Bucky stopped long enough to sniff the first twig. 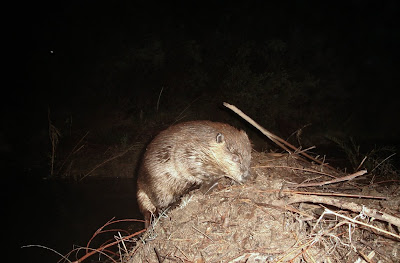 And then the second one. 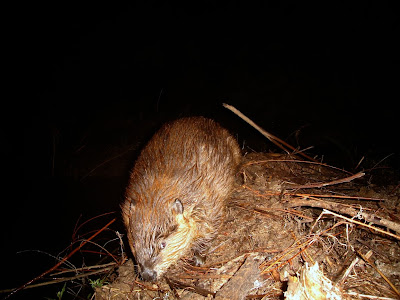 All but one of the other photos were false triggers. That one picture made it clear that the engineer was busy at the other end of the dam.

That made for one cooperative beaver and one happy codger. 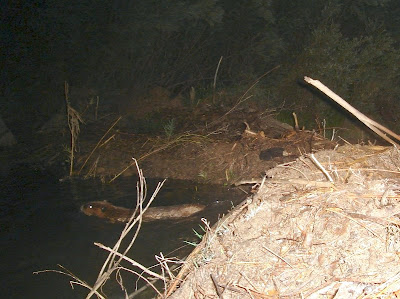 Postscript: Brian informs me that since our visit the beaver(s) have constructed a new dam, downstream from this one. Check out the benefits of beaver dams in Laura Klappenbach's Wildlife Blog.
Posted by Camera Trap Codger at 6:00 AM

But Kitt, how else can I put it? These were my first beaver photos -- I just haven't found beaver dams in California that don't attract people and risk camera thievery, so I had to go all the way to New Mexico. I thought twice about my first title: "My first beaver shot". But I agree, whatever draws 'em in.

Congratulations Chris on your "First" Beaver shot. As you know I recently got mine as well. Very exciting and now hoping for more. One can get addicted to it after the first time you know.
I like the new look of your blog.

Congrats on the beaver photo. Nice clean stream also, any other animals wandering along the banks?

Trade a few beaver photos for a cougar, really liked the last two.

Not enough time, Cliff, but I left three cams in the rimrock to see what goes there.