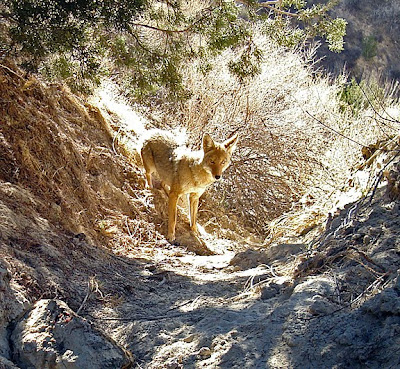 Well possums, your guesses are all reasonable.

Bobcats would certainly cruise for wood rats and bunnies, as proffered by Doug and Desert Nutmeg, but neither showed up at set 312.

No hikers, either, Doug.

And coyotes definitely frequent the haunts of bobcats and vice versa.

In fact, one yodeler, seen above, did make a fleeting appearance just before noon on December 5th.

So Owlman and Randontruth actually picked a species that made a showing.

But Coyote wasn't a heavy user of the gulch.

i'm with JK-beep beep-roadrunner!
Mutant chickens. That is how i described them when i first arrived here in the west.~meg.

having gleaned the sum total of all my roadrunner knowledge from the looney tunes i thought they preferred flatter terrain? - Owen

Definitely Roadrunner ("beep-beep")
if that was a clue or are you trying to through us off?

True, Owen, you expect them in flat terrain, but the camera trap always gives us a few surprises. I didn't expect them there either.