A year in Marin 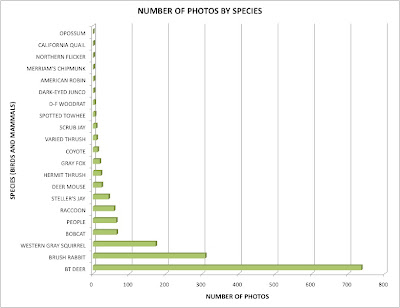 Time to summarize a year of camera trapping in Marin County.

Our camera trapping beat in the redwoods, coastal scrub, and mixed deciduous woodlands, is home to about 28 species of land mammals and year-round or seasonal home of about 144 species of birds.

The goals were to carry out a simple recce of medium-size or meso-mammals and to provide the Audubon Canyon Ranch with the resulting photographs for their education program.

Cameras were set on trails, and we used a few scent lures only for the first few sets.

So most of the time the cameras monitored normal trail traffic. 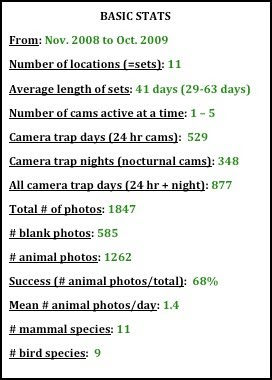 8% of the mammals were people (hikers and school kids).

The graph shows that the most commonly clicked subjects were black-tailed deer, brush rabbits, and western gray squirrels.

Of course some of these photos were repeated images of the same animals coming and going, or weaving on and off the trail.

But all the same, these are abundant species that feed the predators in the area.

We photographed 39% of the 28 mammal species known in the area and only 6% of the 144 species of birds recorded in the area.
That's not surprising.


We were not trying to survey birds, but even if that was the goal, camera traps are not the tool of choice.


If the goal had been a comprehensive survey of mammals we would have fallen far short of the mark.


The problem is this: some species, like bats, shrews, moles, and yes, shrew-moles just aren't very detectable by camera traps, unless you make special efforts.


If you take those mini-mammals out of the equation, we photographed 55% of the mammals known on the property.


The absence of mountain lion photos is understandable, though one was seen in late spring and not far from a camera.


Certainly there is no shortage of lion food in the area.


But where are the skunks?


Road killed skunk has always been a common sight in Marin County, and normally they are highly detectable by camera trap.


Did an epidemic -- rabies, canine distemper or some other disease -- lay the skunks low?


Another thought is that periodically compiling results is a good way to drive home a few messages.


We will have to work a bit more to find microhabitats and amke camera trap sets for shrews and shrew moles, and perhaps bats too.


Third, there is no fixed amount of time that will reveal all species in a given area detectable to camera traps.


Populations change. Mammals are subject to epizootic diseases that periodically reduce populations to very low levels, often over areas larger than the sampling areas biologists use for camera traps.


Fourth, the Marin experience proved that the longer you wait the better your chances of photographing something interesting.


It didn't take long to figure out that set 228 was in the core area of a bobcat's home range.


We monitored one short length of trail for 8 months, and were rewarded with photos of bobcat kittens, and a cat carrying a recently caught gopher snake and brush rabbit.


And finally, many thanks to Gwen Heistand and her staff for their interest and help.
Posted by Camera Trap Codger at 3:06 PM

I’ve been thinking about the same sort of problems/limitations lately. The only solution I could come up with is that I need to save up some money and buy another camera :)

I live in Marin and I know there are plenty of skunks because my friend runs a humane wildlife solutions service at WildCare (wildlife hospital) to help people deal humanely with wildlife problems - like animals moving in under houses, etc. Anyway, right now she's swamped with skunk calls because it's skunk mating season and they are leaving their scent all over town. I've also noticed too that roadkill skunk are very common in Marin, more so than other species. I'm kind of a roadkill obsessed person, so I notice these things... It's interesting that you didn't capture any skunks at ACR!

I'm curious as to why you never get reptiles on your camera traps? Is it because of the height above ground that the beams are set?

We do get lizards occasionally, but you are right -- the PIR sensor is usually aimed too high.

Great write-up Chris. Too bad you didn't get any mustelids.

I've gotten western fence lizards on my cams a few times - they have the ability to concentrate their absorbed heat and stay slighter warmer than the air, thus letting them trip the sensor now-and-again.

Good, no mountain lions or black panthers; maybe I'll go hiking up there.