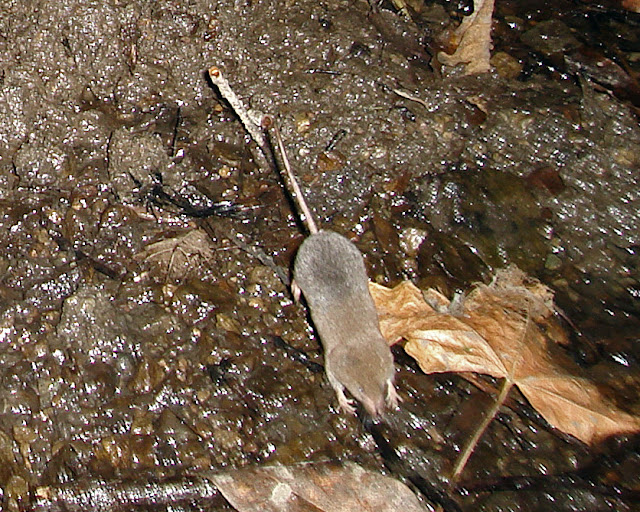 Getting a half-way decent shrew picture is an occasion for jubilation and a bottle of beer.

And this, kind readers, appears to be a Fog shrew (Sorex sonomae) -- two-toned and in the middle of its fall molt.  From the wilds of Marin County,

Did I hear someone say BS?

Okay, I don't know it's a Fog shrew for certain, because shrews are buggers to identify and it helps if you're nearsighted.

You really need to get their skulls out of their heads, or at least give them a microscopic dental exam.

But among Western North American shrews the Fog shrew is a biggie -- up to 150 mm in total length, and if you know the size of big leaf maple leaves, like the one next to this shrew, then you know this is a big shrew.

The Fog shrew also has a unicolored tail, while most western shrews have bicolored tails with much darker dorsal surfaces.

An identity crisis has dogged this shrew for many years.

Hartley H.T. Jackson, who by the way wrote his first scientific paper at the tender age of 15 when most boys are doing other things,  called it the Pacific shrew (Sorex pacificus).

But not for its peaceful disposition. It's at home in the cool coastal forests from northern Oregon to Marin County in California.

Three and a half decades later a young Jim Findley demoted it from full species to a subspecies of the puny but more widespread Wandering shrew (Sorex vagrans sonomae). It was the macro-shrew at the end of the Rassenkreis.

The late medical doctor-mammalogist Murray Johnson and B.T. Ostenson took issue with that decision, but the demotion stuck for forty-five years.

Then Leslie Carraway, a high-powered lady from Texas with an obsession for shrews concluded that it was not the wandering vagrans.

She elevated its rank to the foggy sonomae, and for the time being her word is final.

Christian and I set the camera close to the ground at a small spring that debouches from a patch of ferns.

If you want to camera trap shrews you really have to enter the netherworld of duff and detritus.

You need a tiny camera trap with a short focal length.

You need a lure that smells like slugs, centipedes and worms.

It was just good fortune. The Fog shrew ventured out of the duff. 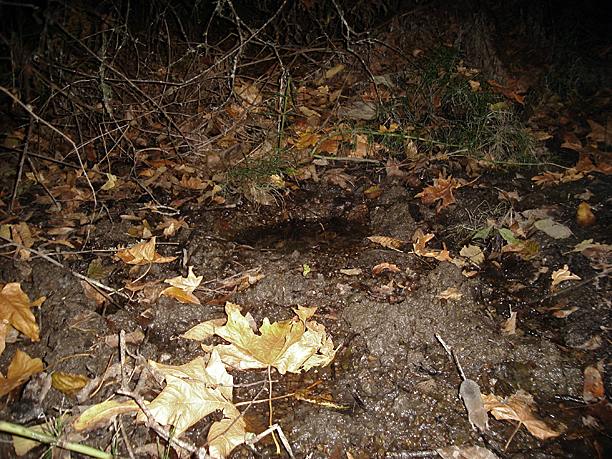 You have given me wicked ideas for making my own homemade lure. Hopefully I won't be mistaken for a witch and burned at the stake.

That's a very decent shrew photo to try and get an ID form: the size, tail, paws, fur and nose shows up well. Congratulations!

IR cameras might allow for some nice videos, but the photos from a white flash camera is just so much prettier (and the color can help with identification). Good stuff.

I just wondered if you knew which end of the shrew was sporting the new coat? My dogs start moulting from the rump and work forward, but my mongooses begin at the head and progress rearwards (they all look like Malayan tapirs at this time of year).

Thanks, all. Not sure what direction the molt. I would guess the newer hair is in the front, but I just don't know. The only review of molting I know of was by John Ling, but it is at least 35+ years old.