"As for timings, I can't predict to within half an hour either way exactly when a train will be crossing the Namkwin bridge. Red and Dennis will have to use their initiative . . . Pat and Bunny will do their stuff not less than thirty seconds after hearing the Namkwin explosion."

Bridge demolition was the work of Force 136 -- ten saboteurs of the Indian Army charged with breaking the supply lines on the Myitkyina Railway.

A C47 transport plane droned east from "somewhere in India" to the Kaukwe Valley where three fires framed the landing zone in the darkness below.

"Well, boys, this is it!, We're almost over the target, Get yourselves ready."

From the Dakota they bailed out into darkness, landed safely, and buried their parachutes in the jungle.

Then they made for the rendezvous point 4 miles away.

And in due course they blasted the bridges.

John Beamish, an Anglo-Burman told the story in Burma Drop -- and a good read it is.

I pulled my worm-eaten copy off the shelf the other day.

Having just paid respects to the Bailey bridges of WW2, I needed to refresh my memory.

The Burma Campaign was among other things a war of bridge building and bridge destruction.

In the chaos of the evacuation of Burma the British demolished bridges to stall the advancing Japanese.

The Japanese repaired the bridges, and then destroyed them during their own desperate retreat 2 years later.

The Bailey Bridge was a convenient solution to trashed bridges.


Donald Baliey (1901-1985) was a civil engineer and a hobbyist model bridge builder who designed a portable truss bridge in his spare time.

It had the versatility of a toy erector set, and Bailey's superiors knew a good thing when they saw it.

Bailey bridges still span some of the streams and rivers -- chaungs in Burmese -- that cross the narrow coastal plain between the Bay of Bengal and the Rakhine Yoma.

There are old bridges of at least two styles, but you can single out Bailey bridges by the emblematic square plates crossing the X-shaped trusses.

The transoms -- linked sections of beams that support the plank road (stringers and chesses) -- stand out with their circular perforations and welded plates. 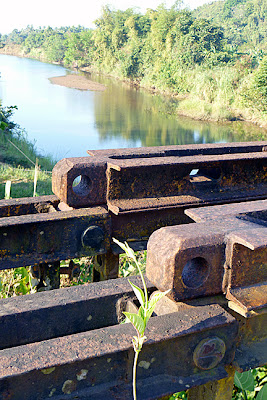 They are still there, gleaming in the midday sun and rusting in the monsoon rain.
References