The shrew that makes a big stink


It was my first night in Yangon, and I was itching to "set a cam".

I had my eye on the backyard of UMA's office-- a small paved space with a sewer vent, and a few ferns growing in the cracks of the cement walls.

I propped the cam between some bricks and dipped a stick into a small container of my secret potion -- castoreum. 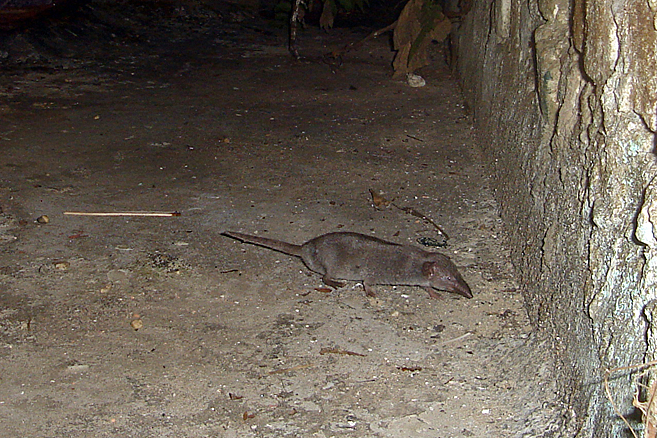 The next morning before dawn UMA delivered the cam to my hotel, but we immediately departed by van for the Rakhine Yoma.

A couple hours later  I viewed the pictures at breakfast and instantly recognized the sleek body and tapiroid head of the Asiatic musk shrew.

Kipling knew the creature well, and in The Jungle Book called him Chuchundra the "musk rat".

But a rat he is not.


We should forgive Kipling his error, for it was Carl Linne, the father of taxonomy who likened this shrew to a rodent when he named the species murinus -- the Latin name for mouse.
Chuchundra is the largest and most cosmopolitan of shrews, and one of many species of Suncus.

You can meet him skirting the walls in the hookah bars of Cairo or the tea shops of Calcutta.

If you hear a shrill grating noise or catch a whiff of something strong, it's Chuchundra.

He rules the Subcontinent of India, and is completely at home in SE Asia.

He stowed away with sea traders, and colonized New Guinea, the Philippines, and Japan, not to mention quite a few other islands, including Madagascar.

He reached Guam in1953, where his speedy takeover defied the conventional wisdom concerning rates of mammalian dispersal.

Chuchundra's colonization was just too fast to believe, and mammalogists surmised that his conquest was aided by 4-wheeled transport.

They didn't like him in Guam -- he dined voraciously on indigenous species --  like the pelagic gecko, and when the US Fish and Wildlife Service tried to exterminate him he was uncooperative.

The gecko is gone and Chuchundra is here to stay.

In the 60s and 70s Chuchundra's devotion to human culture took a strange turn.


Shrew hunters from the US and Japan started live-trapping him in Okinawa, Nagasaki, Jakarta and Guam, and the captives found themselves in a brave new world.

There was plenty to eat and their other yearnings were always met, but their days of rambling were over.

The peripatetic but enigmatic Chuchundra, until now under the radar, found himself in the biomedical limelight.

He was the first insectivore to become a laboratory animal -- a new bag of tricks for those of the white lab coat.

In some ways Chuchundra was superior to domestic rats and mice.

His teeth were not specialized like those of rodents -- making him a model for studies of dental development.

He had an emetic reflex-- meaning he barfs when something disagrees with his stomach, and since rodents can't barf, he became a model for studying drugs with digestive side-effects.

However, the scientists soon realized that Chuchundras were not all alike.

For one thing they differed greatly in size.

There are Indian populations where goliath Chuchundras weigh in at an average of 177 g, while on Guam the average male is a puny 30 g.

There are even significant size differences between shrews from Okinawa and Nagasaki.

It spread to SE Asia with Myanmar being the genetic crossroads of Chunchundra's peregrinations between the two areas.

Chuchundra's fertility is another part of its success.

Females are sexually precocious; they can conceive about a month after birth, and while their litters usually number between 2 and 4, they have as many as 8.

Unless food is scarce they can breed year-round.

What's more females are not beholden to their estrous cycle -- they have none.

They are mating-induced ovulators, and it works like this.

Five intromissions and boy keels over.  Ovulation and fertilization follow within the next 24 hours. The deed is done.

But there's an ironic twist.

While Lady Chuchundra likes a little privacy after romance, Mr Studly peevishly follows and nips her behind.

She'll receive him again when she is good and ready, but any strange male is immediately welcomed as Mr. Right.
Chuchundra's musk may not tame the lady shrew, but it definitely hastens her receptivity and activates her ovaries.

Indeed, anosmic lady shrews, those with surgically severed olfactory lobes can be seduced, but they don't ovulate.


Chuchundra's jitterbug perfume is a distinctive bouquet shared by the sexes.

You can't help but notice it.

But stir them up and they make a big stink you won't forget.

Maybe this is why shop owners and hungry cats give Chuchundra a wide berth.
Early Suncus enthusiasts Gil Dryden and Clint Conaway however wanted to know which of the shrews' several skin glands produced the musk and designed the first scent-smeller's smorgasbord.

The smellers, whom I suspect were loitering students waylaid in the biology building, were asked to sniff and rate cotton swabs that had been rubbed on various glandular areas of the shrews' skin.

In both sexes the potent musk came from sweat glands in the throat region and behind the ears.

Castration eradicated the musk of males, but some ovariectomized females still stunk, probably because of compensatory hormone production by the adrenal glands.

They concluded that the mild smelling flank glands, which are sebaceous and were previously thought to be the stink source, may serve as musk carriers in the same way that other kinds of musk enhance the smell of fine French perfumes.

Anyway, we were enjoying a beer in a local rice and curry shop when I decided to conduct a small survey.

"Do you think the owner knows what a musk shrew is?"

The proprietor looked a little baffled, and when UMA tried to clarify the question by mimicking Chuchundra's pointy nose he looked at us like we were crazy.

Our amusement didn't help matters -- he knew we were nuts.

He admitted to rats, but not shrews.

"Shrews are good luck." I piped. "They eat the cockroaches."

With that we ordered another beer.

Fritts, T. and G.H. Rodda. 1998. The role of introduced species in the degradation of island ecosystem: A case history of Guam. Annual. Review of Ecology and Systematics, 29:113–40

Ishikara, A. and T. Namikawa. 1987. Postnatal growth and development in laboratory strains of large and small musk shrews (Suncus murinus). Journal of Mammalogy, 68(4):766-774.

Yamanaka, A. and M. Uemura. 2010. The house shrew, Suncus murinus, as a model organism to investigate mammalian basal condition of tooth development. Journal of Oral Biosciences 52(3):215-224.
Posted by Camera Trap Codger at 10:29 AM

...but I can't help feeling sorry for the poor Pelagic gecko.

I am going to have to look into the chromosome number issue when I have a chance but this seems quite bizarre to me. I am unaware of any case in mammals where individuals of different chromosome numbers can produce viable fit offspring who are also capable of reproducing. Having a different number of chromosomes will usually cause chaos in the offspring as the "extra" chromosomes are going to be essentially haploid and cause gene dosage issues. Then if that offspring were to breed its gametes would have all kinds of combinations of chromosome numbers, in this case 15-20, which would then cause differential issues in zygote development. I wonder if 2n=30 and 2n=40 are not in fact different species.

There are no doubt several different species now referred to as S. murinus, and the species (complex) needs a revision. The oddball chromosome populations are definitely suspect. The problem is getting material from all major populations. The Kurachi team did not examine any Indian material, for example, probably because the Indian government usually doesn't allow collection of material by non-Indians. ("We can do this work ourselves"). But you've hit on a great Ph D dissertation topic for a young molecular biologist. Check out the Kurachi team papers cited in the Kurachi biblio.

Fascinating read,i got the gist then that the musk is a defensive thing as well as a sexual attractant?

There are probably different compounds responsible for defense and priming the ovaries; its just that we can't smell them apart.