With trappers of the bamboo rat

"U Chris!" called my friends as I lounged on the bamboo deck writing notes.

I roused myself and grabbed my camera.

A Chin boy had just arrived with his dinner.

Yes, while you were receiving my California posts during the past three weeks, the codger was spending his days East of Suez, not far from where  "the dawn comes up like thunder outer China 'crost the bay".

I was in Myanmar giving a camera trapping training course for  Indo-Myanmar Conservation and the Friends of Wildlife, a local grassroots NGO formed by my close friend, UMA. The Denver Zoological Society defrayed my travel costs, because the course was preparation for an elephant survey.

The class of 15 included protected area staff from Rakhine Yoma Elephant Sanctuary, a few local school teachers, and members of the Chin community living in the Rakhine Yoma.

A Chin village in the Rakhine Yoma was our base, and from it we descended daily into a patchwork of deciduous evergreen forest and bamboo brake to check our cameras.

Yoma means mountain range, and the Rakhine (formerly Arakan) Yoma is a coastal range, actually the tail of the Himalayas.

North of here and 70 years ago Japan's Imperial Army routed the 14th Army, and remnants of the war are still to be found.

General William Slim wrote about these hills in his WW II chronicle Defeat into Victory,

They are not much of an obstacle to the people who live here, but they travel lightly.

No 65 lb packs, or even water bottles.

Just a dah or long knife.

They know how to tough it.

And when a hungry boy catches a bamboo rat, he doesn't need mom or dad to skin it or cook it for him. 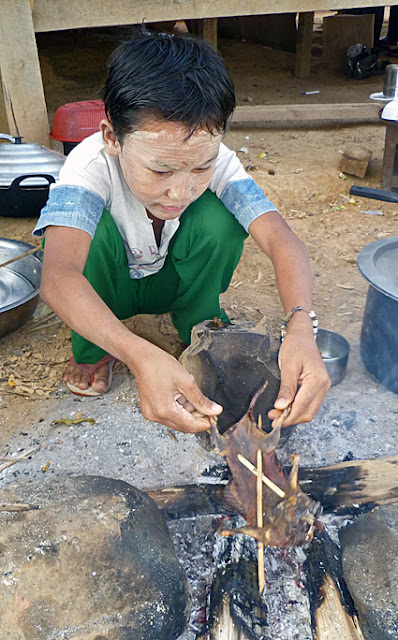 He does it himself and roasts it to perfection.
Posted by Camera Trap Codger at 9:28 AM

Awesome post and awesome pics Chris. I take it this is a snare trap, with the rat sticking his head in the big 'boo tube, and the snare springed from the vertical bit of bamboo? A nice efficient design!

Wow. SUPER interesting, and what an impressively skilled and super photogenic young man! =) Love that face wash. [On a side note: I glanced at your profile and you live in Magalia?!? I went to Paradise elementary/jr. high/1 semester at the high school, several times visited Magalia, AND rode my first horse in Toadtown!]

more
more
i want to see Suncus and other small varments

A snare it is, Patrick, and it kills quickly since the wire catches the rat by the neck with great force. It might be a better design than our commercial gopher traps. I'm going to make one out of PVC.

Biobabbler -- Yep, we're stuck out on a ridge and look down Butte Creek Canyon to Llano Seco and the wetlands.

Anon -- hold on, me mann, Suncus is taking shape.

A tv programme showed the bamboo flowering once every 80 odd years with the result that the bamboo rats plagued and ate everything in sight until all there was left to eat were the rats themselves......

Very cool experience, great post! Do you know what he used for bait? Something smelly, edible, eye catching, other, or just plain rodent curiosity?

They use garlic and onions, both highly attractive to bamboo rats

Do you have any detailed photos or drawings of how that trap works? I would be interested in seeing them if you do.

I'll post some more photos in a few days.

Hey Codger
Nice trip and great experience but eating Rats would not be my first choice.
I would like to see the design of that trap and wonder if it would work on gophers.
I'll experiment with various gopher
recipes for your upcoming visit to Humboldt County.

May I suggest that you try your hand at long-simmering gopher curries? Just strain it so we don't have to spit out the bones. It's too time consuming and interrupts conversation.