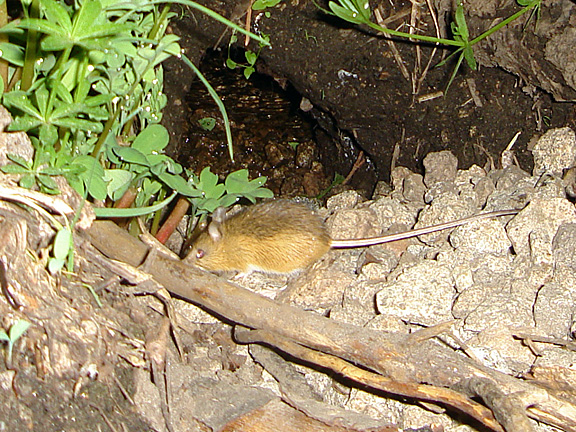 It's two-toned body trim, yellow sides, and long tail are distinctive features, and it befuddles its predators by jumping like a grasshopper.

It's the jumping mouse of the mountains, usually found along creeks and drainages. Its relative, the Pacific jumping mouse is coastal in distribution.

This fellow made an appearance at the Aplodontia burrow staked out by Bill. 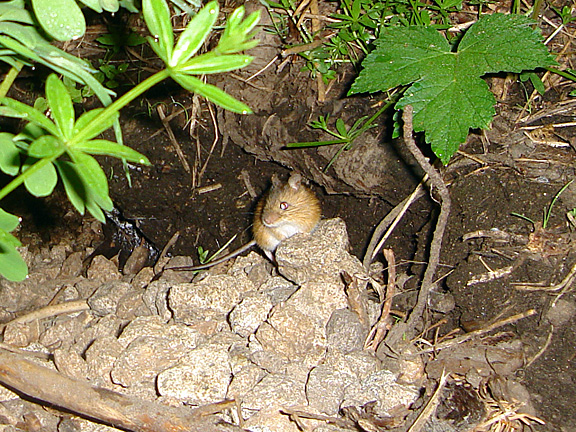 My first encounter with the Western jumping mouse was in June 1962 on the Little Truckee River in the Tahoe National Forest.

School was out, and four of us, three budding biologists and a geologist escaped into the northern Sierra Nevada to do some collecting.

Here's what I wrote in my field notes:

"The two rat traps I set near burrows on the 'sagey' slope across the river."

"The next morning we woke up at 7:30. I picked up my traps and then ate breakfast."

"I skinned them out and then we ate lunch."

"After lunch I decided to do a little cicada collecting . . ."


7:30!! What a bunch of lazy butts. I might note that we had trouble boiling the noodles the night before and didn't eat dinner until 11:00.

Ah, the sweet days of youth.
Posted by Camera Trap Codger at 8:49 PM

That is a beautiful mouse!

I saw, photographed and got some nice video footage of your princely mouse this week! I was so excited that what I thought was a frog turned out to be a swimming mouse. I looked him up in my mammals books and just googled it for visuals and BINGO! There's the codger once again and I even remember reading this and see that I commented on the post. I remember disgust at the little guys being skinned--now I really can't imagine doing in that super cute swimmer and night bather I saw. I watched for it on three nights at the same time and it did not disappoint. I'll send you the video after I clean it up. It was on The South Fork of the American River near Echo Summit, so about 7000 ft. What a delightful surprise to see such a gorgeous creature hopping and swimming down the waterway--on one night I had about 10 people with me for bat viewing. The mouse was the highlight of the night, and for me, of the week.

That's great news, Joellen, and I look forward to seeing the video. I am still looking for the water shrew, where I can get some aquatic footage. I've gotten them on land -- now need to see them in water.