A week at Wind River Ranch 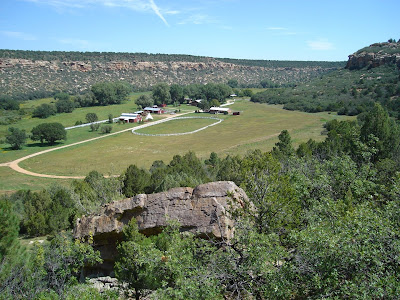 Hdq at the ranch.
Last month buddy Dave and I flew to New Mexico for a week on the range.

And wouldn’t you know it? Orbitz doesn’t list Southwest flights. How come? Too much competition for the big guys? So we went online and got a senior’s deal on Southwest. This is an airline that doesn’t charge $15 for your suitcase, and what's more, they feed you peanuts.

My old friend Brian Miller (remember robobadger?) was reading the paper when we found him at the Albuquerque airport. After endearing ourselves to the parking lot lady trying to find the ticket (I was sitting on it), we hit the road and rolled northeast toward blue skies and billowing thunderheads. 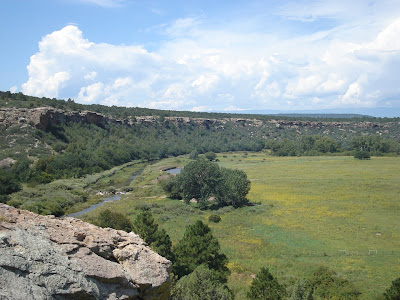 Riparian habitat restoration area.
There was a road-side stop to tank up and gobble tamales, and three-hours later we arrived at the Wind River Ranch -- a not-for-profit organization dedicated to preserving the ecological heritage of the southwest.

What a place. The ranch straddles some stunning landscapes against the backdrop of the Sangre de Cristo Range, and the Mora River runs through it. The Santa Fe Trail and Fort Union are a stone’s throw away, and the short grass prairie, pinon-juniper and oak woodland probably look much as they did a couple hundred years ago. 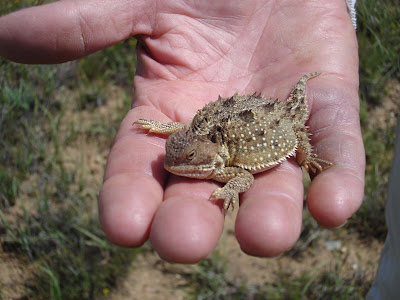 A most lovable lizard.
Philanthropist and art collector Eugene Thaw created the ranch. A man who appreciates fine things, he also knows that under normal circumstances such things don’t self-maintain. His goal is to preserve this 4500-acre landscape as a window into the past, so future generations can make the connection between human welfare and nature.

The land was used by the Jicarilla Apache and Picuris Pueblo when Mexico issued the Mora Land Grant, and it was also used by Navajo, Ute, and Comanche.

But a lot has changed since then. Bison and prairie dogs are missing, and prairie invaders like snakeweed and pinon/juniper are edging out blue grama and buffalo grass. Cheat grass has also made an appearance, having already taken over large areas of the west. 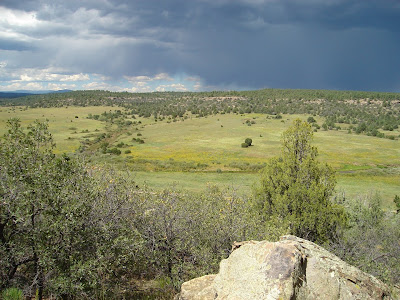 Prairie pinon-juniper interface.
To make it ecologically whole again, Thaw hired Brian as executive director. For having the right instincts, knowledge and temperament he couldn’t have picked a better person. And to underwrite the staff and operations he created the Wind River Ranch Foundation.

Brian forged a partnership with the Jicarilla Apache and Inter-Tribal Bison Cooperative to establish a free-ranging herd of bison, and several private groups have helped to re-establish black-tailed prairie dogs. This year he is expanding riparian habitat along the flood plain of the Mora River – critical habitat for the endangered willow flycatcher.

Education is a major theme. School children and young scientists use the ranch as a laboratory to document baselines of flora and fauna, measure change, and understand the dynamics of the ecosystem. WRRF also tries to fund grad student projects from money raised for ecological restoration projects.

Our mission, and you won’t believe this – was to establish a reference collection of grasshoppers. Don’t laugh. There are more than 160 species in New Mexico, they’re big in the food chain, important in nutrient cycling, and they have major economic importance. (Not to mention the eggs from Brian's grasshopper-foraging chickens.)

As buddy Dave can tell you, entomologists take a lot of crap, because the man on the street is biologically challenged. Recently Dave had to remind some snickering birders that if it wasn’t for grasshoppers their life lists would be a bit shorter.

I wasn’t far from fellow bloggers Beverly, Steve Bodio, Chas Clifton, and Smokin Bill Schmoker, all of whom I would enjoy meeting, but grasshoppers and rimrock beckoned.

Besides we had assignments. More on that soon. 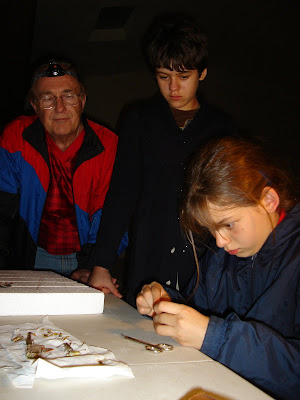 Dave instructs the Miller girls on prepping hoppers.
Posted by Camera Trap Codger at 5:00 AM

Looks like a fantastic place, Codger! Glad to have you out in the eastern western states... Let me know when you find your way north one more in Colorado!!

Anxiously awaiting the results of your assignments...

Thanks Beverly. Fixed it. Gotta quit these 24 oz bottles of beer while blogging.

Really neat place. I definately would like to visit this place. On the grasshoppers. Being a casual birder and serious raptor watcher; I learned to have a much greater appreciation of insect (and bird) biology after reading Bernd Heinrich's books Winter World and Der Vogel Snarchen. I am still planning to read his book Bumblebee economics.

No, you weren't terribly far away. How about organizing a "blogger bash" at the ranch?

Chas, I believe Brian would be all for this idea. I'll talk with him about it.

Brian's up for it. I'll holler in advance next I head for the ranch.

Count me in too!