Brawl at the badger dig 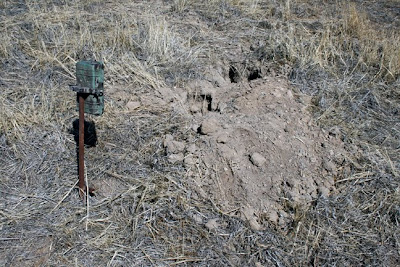 Set 305: a badger dig in the grassland.
There are several possibilities of course, but when you set a cam at a badger dig you are hoping for a badger.
Badger diggings are common in grassland at Chimineas, because California ground squirrels are abundant.
Set 305 was a ground squirrel burrow that seemed to have been enlarged by a badger.
Craig notes that big clods of dirt indicate that the digger is a badger, rather than a ground squirrel, whose excavation equipment is much smaller.
So we staked a camera next to the burrow, and knowing that diurnal ground squirrels could fill a card in a few days, we set it for night pictures only.
As we viewed the pictures last week, it was apparent that mice outnumbered badgers.
In fact there were no badgers, and less than one out of 3 pictures had an animal in it.
California pocket mice (Chaetodipus californicus) were the most common visitors, and had no doubt caused the false triggers. 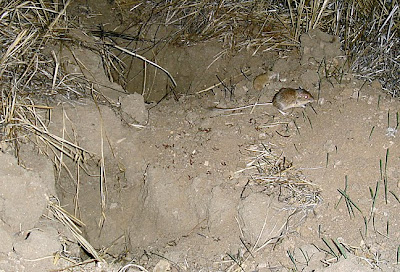 Most of the pictures were presumably of one mouse puttering around the burrow tailings and entrance.
One expects small mice to live in small burrows, so my assumption is that this one lived nearby and was foraging for seeds in the exposed soil of the ground squirrel nest.
But it could have had a sub-burrow somewhere within the ground squirrel tunnel.
A few frames later revealed that an intruder had brazenly entered the resident's territory.
For its cheekiness it was paying the price. 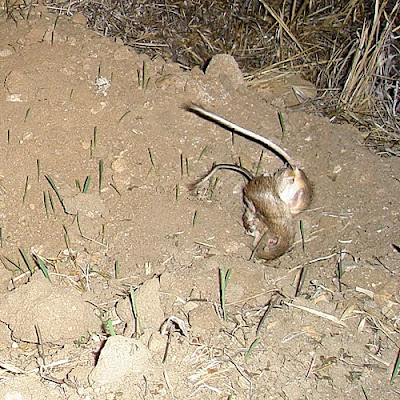 The brawlers were locked in mortal combat. 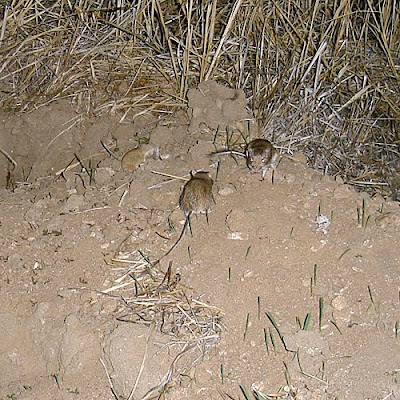 They broke apart and faced off.
At that point the resident retreated to the burrow, and it seemed to be over. 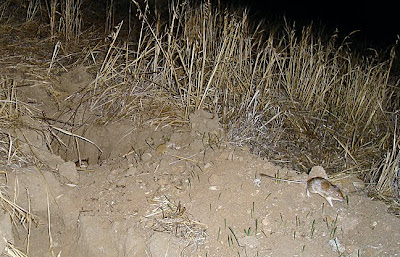 But a few moments later they were at it again, this time boxing. 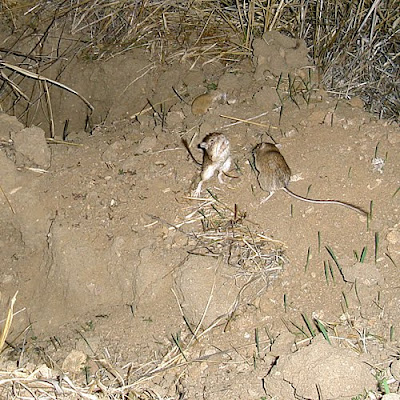 In the final frame the apparent winner watched the vanquished preparing to retreat into the forest of grass.
The brawl had lasted a little more than a minute. 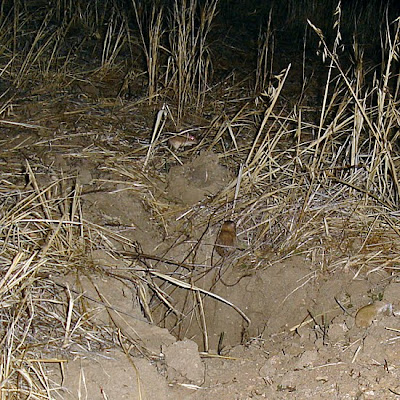 Victory is sweet.
Posted by Camera Trap Codger at 11:21 AM

A photo is worth a thousand words!
Wonderful to see the action that happens in nature while the rest of the world goes about their daily activities.

Thanks, Terry -- and have a great Thanksgiving.

Man, your pictures are always so cool!

Wow that was unusual. I just wrote an incredibly long comment but after I clicked submit my comment didn't show up.

Grrrr... well I'm not writing all that over again. Anyhow, just wanted to say fantastic blog!