Nicholas Smythe was a fellow graduate student who made me aware of the great possibilities of camera trapping.

We were both "Eisenberg students" at the University of Maryland, where we shared a basement office, occasionally with the company of cotton-top marmosets and a misogynist raven named Rolf. 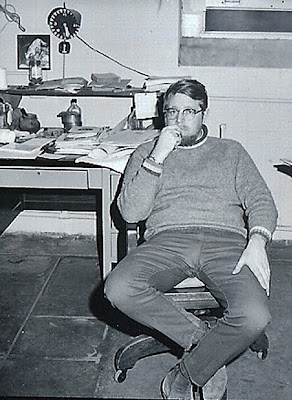 Nick Smythe with his 24 hr clock in the background.
Nick was fresh from the field -- having spent 2 years studying the ecology of the Central American agouti (Dasyprocta punctata) on Barro Colorado Island, a field station of the Smithsonian's Tropical Research Institute in Panama.

And he was full of observations and ideas.

Among the mementos of his field days were the remains of his camera traps: several worn Olympus cameras, a 24 hour clock, and a 4" spool of spliced 35 mm negatives.

The negatives contained hundreds of pictures of peccaries, agoutis, pacas, and coatis blithely foraging in the windfall of fruit from giant tropical trees, not to mention ocelot, motmots, iguanas, and a boa constrictor.

He also had crisp black and white enlargements of the courtship of male pacas, and I recall one in particular of a bipedal male enurinating (= peeing upon) the object of its affection -- an unconcerned female several yards away.

The flash had highlighted a cloud of airborne urine droplets midway between the couple. Wow!


But Nick's main camera trapping goal was to determine circadian activity cycles of agoutis by monitoring their visitation of fallen fruit, their main food that accumulates beneath tropical trees.

The cameras also helped to determine their home ranges, since marked agoutis could be identified at different sites.

Recently Nick kindly elaborated on his camera traps.
"I tried several different cameras before settling on the Olympus Pens".

"The details are foggy in my mind, but I believe that the first was the Canon “Dial”.  Then there was a Russian made camera which proved unsatisfactory for reasons unremembered.  I think there were others.

The Olympus Pen series of cameras included the EM, which was the first 35 mm camera with battery powered film advance and rewind.

Nick hacked 4 of the cameras -- a bold act for a graduate student in zoology.

None of us would have dared such an undertaking, but he was a clever tinkerer who understood electrical circuits.

The motorized EMs were well chosen because rodents can trigger quite a few pictures when foraging at a windfall of fruit.
In addition, the half frame cameras doubled the maximum number of exposures possible.

If you bulk loaded your own film canisters, you could push it upward of 72 frames.

That was a real advantage, though a far cry from the 4 GB memory cards we use nowadays.

He used solenoids to release the shutters.

Cameras, solenoids and electronic flashes were housed in water resistant boxes.
"I was not able to find a 24 hr DC clock, so I used one that relied on AC.  This involved running long wires from the lab clearing to the camera sites which, in the ambient 98-100% humidity, gave rise to some interesting involuntary muscular contractions!"
"The triggers were a constant problem.

"I made some that used a 3-4mm copper ring as one terminal and a vertically hung copper wire as the other, but they were unreliable.

"So I used trip wires and micro-switches, and they were moderately successful, but peccaries and tapirs did not treat them kindly.

"And I have had several pictures that showed, indisputably, that agoutis knew very well where the wires were, and inadvertently tripped the cameras while attempting to avoid the trigger wire, or a conspecific, or, once, a coati that obviously had gustatory ambitions.

"Sadly I missed more proof that coatis are opportunistic predators on agoutis.

"Finally, I did rely on photoelectric sensors.  These, of course, required a light source on one side and a sensor on the other,  rather than a light and a return reflector.

"I didn’t know if IR light sources were available at the time so I used incandescent (modified flashlights) as a source.

"I made them myself and they suffered accordingly (the atmosphere in the Panamanian forest is not kind; I still have ear and body fungi that are undiagnosable by local MD’s).


But the cameras paid off and it became quite clear that agoutis are busiest feeding during daylight hours (Figure 18 is from the citation below). 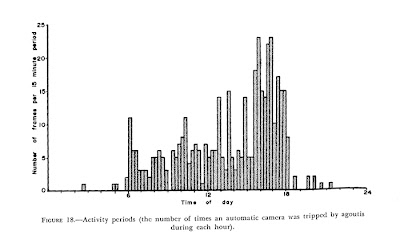 Great post about Nick. I used one of his cameras in 1993 to get pictures of kinkajous up in the canopy. I would love to see some of his BCI pictures.

Thanks Roland. I would love to see those old photos too. They were simply great. And thanks for the link -- it's definitely worth viewing.

NIck was always one of my favorites..thanks for this!