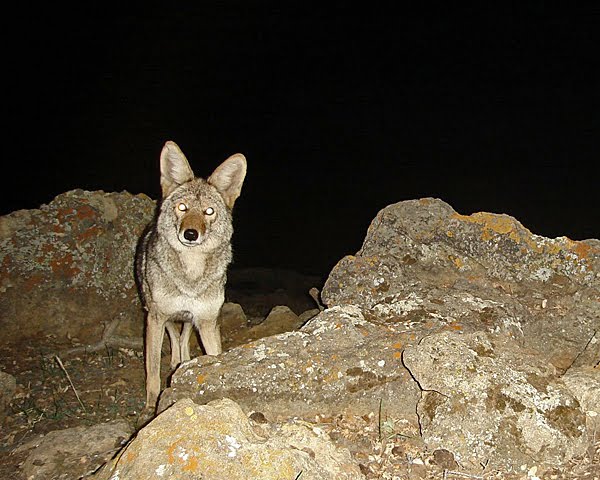 A coyote was also photographed at the set of the curious crumple-eared bobcat.

Here you can see the effect when the flash is on the red-eye setting.

The tapetum lucidem still reflects the flash's light, but with pupils contracted the eyes don't look like headlights on high beam.

By coincidence I stumbled upon Lewis Garrard's description of the song of the yodel dogs:

" . . . a species of music much like a commingled bark, whine yelp, and occasionally a spasmodic laugh, now tenor, now basso; then one would take a tenor solo, and after an ear piercing prelude, all would join in chorus, making an indescribable discord."

Thanks to Brian of Wind River Ranch (another western frontier romantic) for sending Garrard's book.

Before going away, listen to the yodel dogs' repertoire at Soundboard.

Garrard, L.H. 1955. Wah-to-yah and the Taos Trail, or prairie travel and scalp dances, with a look at Los Rancheros from muleback and the Rocky Mountain campfire. University of Oklahoma Press, Norman.
Posted by Camera Trap Codger at 7:12 PM

Love their laughing howls. Isn't that the same handsome fellow from your 'Coyote beautiful' post?

Another great photo and thanks for the vocals.

RT, I guess it is possible, but it is a long way away from the sandstone amphitheater.

What color are your dog's eye shine?

Goldens have yellow eye shine, while my black "golden boxer" and my grandpa's Norwegian elkhound had green eye shine.

Fred has greenish blue night eyes, but I noticed the other night that they change slightly with angle of view.