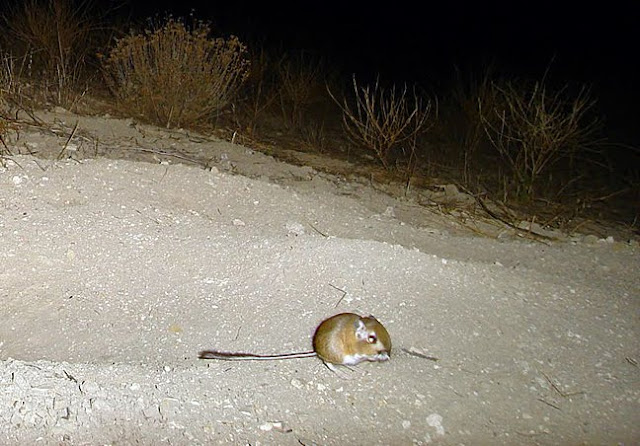 Kangaroo rat!  A new species for our survey!

In six months of camera trapping we've seen plenty of k-rat burrows,  but we haven't seen one k-rat in pixels.

The question is, what species is it?

There are 17 species of kangaroo rats, and about 14 of them live in California.

Fortunately, from the standpoint of identification only two species are known to live on the Chimineas Ranch.

My first suspicion was that this was Heermann's kangaroo rat (Dipodomys heermanni), because it lives in valley grassland, and that's where we photographed it.

The other species is the endangered giant kangaroo rat (Dipodomys ingens) which is also found in valley grassland, but also lives in drier desert habitats.

I could have settled on Heermann, but I looked up other distinguishing traits in several references.

Well, Heermann is about 12 inches long, and the Giant is 13 inches.

Hmmm. Hard to estimate size from these photos.

Heermann's tail is light gray or abruptly whitish, and tipped with little or no crest.

Well, that's not this guy.

I'd say there is a distinctive crest. Plus the tail stripes are well developed and the tip is dusky.

Now it looks like our kangaroo rat may be the Giant.

Better verify it by looking at other features.

This rat doesn't have blackish ears.

The Giant has a dusky colored nose, whitish cheeks and blackish eyelids.

What? That doesn't fit this rat. Now it sounds more like a Heermann.

Do you follow me? Right -- I'm not getting anywhere.

Here's the thing.  It's hard as hell to identify a lot of small mammals with field guides.

Shrews are deceptive, deer mice are often difficult, pocket mice are problematic, small bats can be baffling, and . . . and even chipmunks can confuse the amateur naturalist.

But that's not to say it's impossible. You just have to work at it.

Anyone who handles enough critters, live and dead, starts to be able to tell them apart.

I just have to look at a lot more kangaroos rats.

(I'll bet Craig knows exactly what it is).

Excellent. Wondering when the traps would show these guys. But maybe there's more than 2 species there? My book by Lone Pine agrees with your assessment, but is also showing this guy to be a ringer for their description of the Fresno K-rat, D. nitratoides...

From the camera trap area and skulls that we have keyed I'm guessing Heermann's kangaroo rat (Dipodomys heermanni). However, there are up to 5 different species in the Chimineas region (giant, Heermann's, Fresno, narrow faced, and agile). In the hand, giant and fresno are easy but it can be rough with the others. We are sending mid-sized specimens to MVZ for further identification.

Thanks guys. They're endearing rodents.

Hey it's a great photo of a Kangaroo rat and that's close enough for me.

Is there any way you could measure the hind foot?

There is, Erin, but I would need to calibrate it ahead of time.