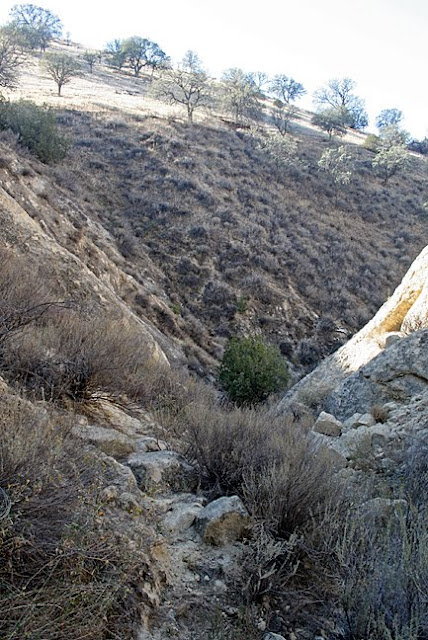 From the standpoint of scenery there was nothing special about set 312.

It was just a narrow defile, a very old and slightly winding erosion gully in a steep hill.

Craig found it and I am glad he did.

Thirty-five days later the cam snapped his picture a few moments before he pulled the camera.

Macy is leading the way. 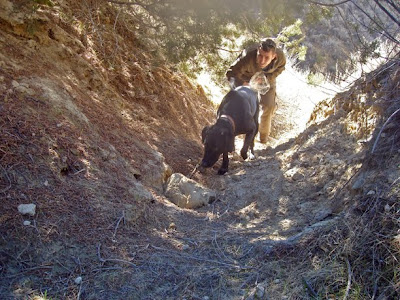 The camera snapped 88 pictures of which 30 were blanks.

The amazing thing is that nearly 60% of the animal photos were bobcats. 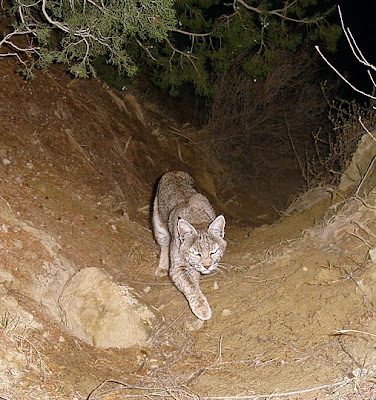 We got them coming, 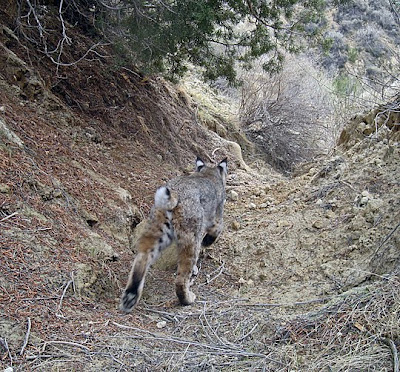 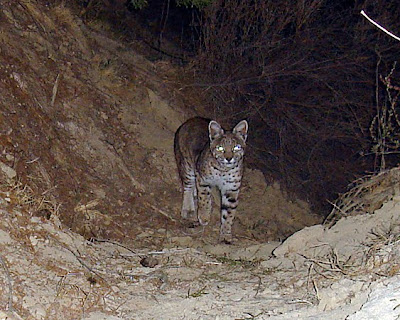 Check out their left forelegs and you will see that at least these two cats were different kitties.

We counted nine different visits, where a visit is one or more photos clustered in time. 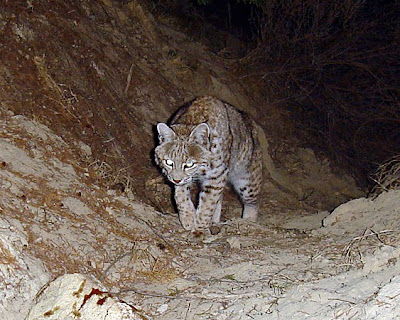 It seems the defile was a passage way for at least two bobcats.
Now then, what was the next most common user of the defile?
Go ahead -- take a guess.
Posted by Camera Trap Codger at 8:37 PM

I'm going to guess either rabbits, or hikers.

Jackpot! Do you know if the ruff of fur around the jaws is more prominent in males? Or maybe an age thing? You have one with a nice 'beard', and another with a slim face. Great pics.

Excellent. As you've taught us, gullies make great sets. I'm writing up a post on one now too.

As for the next most frequent... any where else and I'd say gray fox, but at Chim: coyotes.

Wonder where those bobcats are denning?

Still tuned, folks, you will soon see what else showed its face.

Johanna -- As far as I have been able to tell from a quick check of the literature (mainly the ASM's Mammalian Species on bobcat), is that the facial ruff is not a sexually dimorphic feature. Body size differs between the sexes, but I can't find a reference to the facial ruff in that particular review of the literature. My opinion (for now) is that the lack of the ruff is a sign of immaturity seen in young adults. Conclusion-like the females of the Planet of the Apes, beautiful female bobcats also have beards.

My guess is a Rat-perhaps Wood Rat.
And... love the markings on the back the ears of the cat. They are stunning!

Excellent, it´s a real joy for me to see photos of these magnificent cats.
They resemble a lot the Iberian Lynx which was hunted almost till extinction here in my country.
Thank you for sharing !

You're outstanding in your field
again and this time the reward is worth the effort. I guess deer and coyotes use this route.

I'm guessing, but what about something dangerous a bobcat might want to know about -- keeping track of enemies?

What would be dangerous to a Bobcat - other than a human with a gun?

Mountain lions take bobcats. That's another possibility. And the golden eagles in the area could nab an immature bobcat.

We have a problem losing cats to owls. Ok...I'm not positive that it's owls ... coyotes are a definite possibility as well...but there's a definite pattern in losing cats with white markings as opposed to cats without white markings. From a size perspective, I guess the ratio is probably about the same - but I have to admit...never thought about eagles and bobcats as predator/prey relationship.

Did you see the supposed lynx that was spotted on the downhill training grounds at Vancouver?