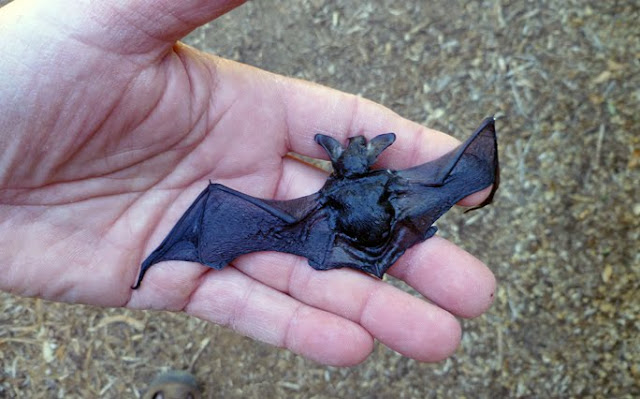 The fuzzy thing I felt in the pool strainer was a dead bat.

It was so small I thought it was a western pipistrelle, but on closer inspection I saw that it was probably an immature Myotis.

Was it roosting under the roof tiles of the house and fell into the pool on its maiden flight?

Or was it hanging from its mother's nipple and fell off when she skimmed the pool for a drink?

Any learned explanations out there?

(PS: I measured it and preserved it as an alcoholic specimen for the California Academy of Sciences.)
Posted by Camera Trap Codger at 8:03 AM

Bats drink on the wing, so the slightest miscalculation while swooping to lap from your pool probably cost this little guy its life. Bats can swim, but that is no help if they can't climb out when they get to the side of the pool. Bat Conservation International has a program called Water for Wildlife to help people, especially ranchers, make open water features safer for wildlife that might fall in. You can download the handbook here:
http://www.batcon.org/pdfs/water/bciwaterforwildlife.pdf
and look on pages 8 and 9 for some slick and simple ideas which will save small lives!

If CAS is looking for alcoholic specimens, I know a couple o' guys I could send over there.