Codge recently found himself sitting beside a cart of seven boxes on the fifth floor of the Denver Public Library.

The boxes contained the professional papers of the late Stanley P.Young, the former Division of Biological Survey's predator man who orchestrated the control and eradication of wolves, coyotes, and pumas on the western ranges.

It was a passage back in time, and if you remember the opening scene of Little Big Man you'll know how I felt -- a little like the awed historian interviewing the 121-year-old Jack Crabb (played by Dustin Hoffman) in an oak-paneled library somewhere in Kansas.

I actually used to see Stan Young in the halls of the US National Museum (Washington DC) in 1967, two years before his death.

He was a retired civil servant and the codger was a 23-year old temporary employee cleaning skulls for the Division of Mammals.

I had read his books -- The Clever Coyote, The Wolves of North America, and Puma, Mysterious American Cat , but just couldn't muster the nerve to introduce myself.

Forty-three years later Young's letters, manuscripts, and photographs were telling me his story.

First I went to the box of photographs, and felt a little sad looking at the government hunters' pictures  -- pant-smiling wolves in the grip of Newhouse No. 4 1/2 foot-hold traps.

The happy face of stock dogs herding sheep and Fred fetching sticks is the same face worn by those panting wolves as they faced death in the bright sun.

Then there were pictures of excavated dens -- dead coyote pups neatly posed in rows beside their dead mother, her head resting on her forelegs.

I wasn't sitting in judgement. Judge not a man of the past by the standards of today, right?

In fact, Young loved wildlife and the outdoors, but he was a predator man and a damned good one.

Viewing those stirring images however was like eating dessert before the main course.

I had already used up an hour, and it was time to search for material about Young's camera trapping expedition in 1937 for cougars in the Carmen Mountains of Mexico.

When I found the file I read it and took notes like a crazed fiend.

My mission was accomplished and time was running out, but there were other boxes.

I opened each one and scoped the hand-written labels on the folders.

You won't believe it, but I found more material about camera trapping.

So my project isn't finished.

There are still unanswered questions, but in due course you will read about Young's camera trapping partnerships here.


I enjoyed the hell out of that library visit, and the scenery on the walk back to the hotel was in the spirit of my quest. 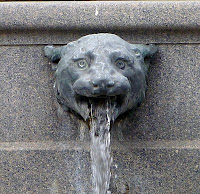 Postscript: An appropriate photo for this post might have been a snapshot from the movie Little Big Man, like the geriatric Jack Crabb being interviewed in the library.  I couldn't find that snapshot,  though I googled up quite a few shots of Mrs Pendrake (Faye Dunaway) giving a young and pleasantly confused Jack Crabb a hot bath.  I was tempted to use that picture instead, but the film industry is greedy, the thumbnail was minuscule, and the cougars I was interested in bore no resemblance to Faye Dunaway.
Posted by Camera Trap Codger at 3:48 PM

Thank you for the story about you and the boxes of Young's records. I could imagine the thrill at the moment of discovery, but wondered why they were there in that particular library?

Young lived in Denver for 6 years as a predator control agent for the Colorado-Kansas District. His daughter donated the collection to the public library, where there's a large archive on western history.

"I wasn't sitting in judgement. Judge not a man of the past by the standards of today, right?"

Very good point Codger. My Great Grandparents raised or grew most of what got put on the table. They considered anything that preyed on the livestock or ate the garden as vermin. If you lost livestock or the garden you didn't eat. Most of the large predators where gone from the Shenandoah Valley at that point but Redtail Hawks were still plentiful. My grandparents killed the hawks on sight because they preyed on the free ranging chickens they raised for meat and eggs. As a young boy I rarely saw a hawk. Fortunately today the Redtail Hawk population has recovered and I can at most any time stand on my porch and see one lazily cruising through the sky.

He quite an emblematic character. Do I see a biography on the horizon?