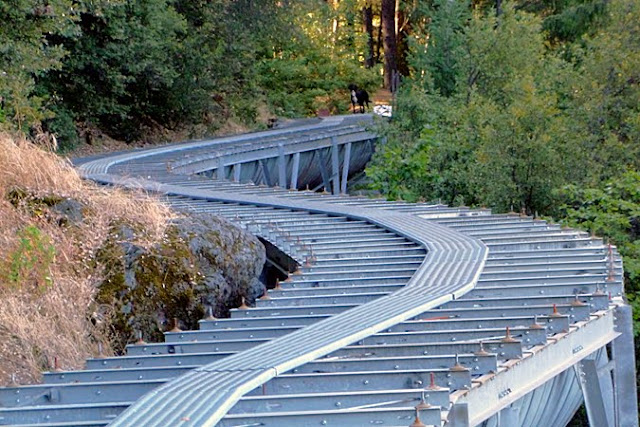 Normally I don't cross this catwalk, because the trail is interrupted by many short catwalks beyond this point, and it makes for a lousy bike ride.

This morning I decided to cross it  to escape the other hikers -- the cool weather brought them out early.

By forging ahead they would have time to return to their cars and I could whizz back on a clear trail.

Fred was of a different mind.

He watched me pussyfooting with my bike across the span and yodeled his angst.

I paused to coax him but kept going until I realized he might call in a puma.

Pumas here are quite fond of dog.

So I turned the bike around and headed back wondering why the sudden agoraphobia?

Crossing these expanded metal catwalks is nothing new to my dog.

He has crossed this and many others with me, often at a run and almost daily.

He shoots the rapids in the flume.

Did he know something I didn't know?

Had he detected something I had missed -- a perception in canine scentovision -- a moment of prescience -- a Lassie-like premonition?

Or did the expanded metal hurt his paws after the 3 mile run?

I can't explain it and neither can he.
Posted by Camera Trap Codger at 8:32 PM

I've had my dog balk at things like that too. And since trying to carry a frightened 70lb animal across a bridge is no fun, she has the final say in such matters.