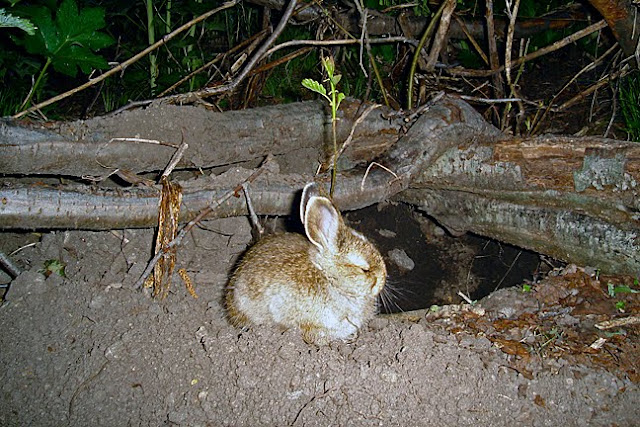 The mountain beaver's burrow was also a hangout for a young mountain cottontail (Sylvilagus nuttallii).

"Normally members of this species are found to occupy rocky, sage covered hills and canyons in preference to plains. Locally it is to be found in willow or dense brush associations, often near springs or watercourses."  So wrote the late mammalogist, Robert T. Orr.

This location was far from sage, but it was was definitely brushy and near water, and the species was a welcome addition to my camera-trapping list.

There had been no sign of them during the past two years of summer camera trapping in Sierra County.

The camera recorded the cottontail at the burrow three times over two weeks, all between 2300 and 200 hours.

Though this is the time of day when bunnies should be foraging, this one seemed to be dozing most of the time.

Cottontails start to move about at an early age, and since the average litter size is about 4, there may have been siblings around.

Or this one could have been a sole survivor, because young rabbits are particularly vulnerable to predation.

In the Cascades of Oregon juvenile mortality is 40-80% by the end of August.


The mountain cottontail is particularly dependent on free water and succulent fodder to maintain its water balance.

On the west slope of the Sierra Nevada springs and creeks are common, but in the rain shadow of Oregon's Cascades scarce water drives these rabbits to do some odd things.

There in Deschutes County, Oregon, B. J. Verts and his students at Oregon State University found that on early mornings of July and August Mountain Cottontails imitate old-timey lumberjacks.

They climb spreading junipers quite adequately without the aid of climbing irons and ropes, and browse on the needles.

Juniper is less nutritious than other readily available plants and its terpenoids are not known to be tasty.

The researchers hypothesized that the rabbits were going to these extremes to get water during the driest part of the year.

Here in the Sierra Nevada the situation is different.

Aplodon's burrows often have running water, and the cottontail just has to duck down the burrow to get a drink.


Orr, R.T. 1940. The rabbits of California. Occasional Papers of the California Academy of Sciences No. XIX.

Burrow opportunists huh? Interesting. I think I caught a few shots of this guy on one of my short sets during the workshop. It was on a burrow in that same area. Probably nipping in for a drink there too!

I always liked to joke and say that baby rabbits/hares are so cute because no predator would harm such a cute little ball of fur. I could imagine a carnivore looking for a meal and then not having the hart to kill such a cute baby.

But you shattered my 'hypothesis': “juvenile mortality is 40-80%”. Now that I think about it a bit more I also think most rodents are terribly cute and they also feature prominently on the carnivore menu… Thus, I now formulate a new hypothesis: cute = tasty.