The yesin (pronounced yay-sin), so well known among rural folk in Burma and Thailand has never been camera trapped.

There are plenty of indigenous and foreign wildlife biologists looking for adventure and new species within the yesin's range, and some are experienced camera trappers.
My hunch is they haven't been looking in the right place or haven't even tried because they regard the yesin and its lore as just so much malarky.

Let's assume however that the yesin is a small, nocturnal, cryptic, and undescribed species of aquatic mammal.
You are not going to camera trap it on game trails because it's aquatic (Burmese "ye" = water).
Fishermen who occasionally net them say they are the size of a shrew or rat, smaller than the quarry of most camera trappers.
If the yesin exists I rather doubt there is more than one species and would attribute the size variation to age differences and possibly sexual dimorphism.
What makes the yesin fantastic to the gullible and doubtful to the skeptic is the claim that they are dead ringers for tiny elephants (Burmese "sin" = elephant) and have venomous tusks.

Elephants are terrified of them, or so claim the yesin experts, usually fishermen and mahouts who I should add have a reputation as story tellers but not teetotalers.

My earlier hypothesis was that the yesin was the rural Burman's joke on the colonial British, many of whom were enthusiastic and at times overly credulous amateur naturalists.

Perhaps the Burman was only telling the vainglorious Brit what he wanted to hear -- that fame was around the corner in the form of a new species waiting to be discovered.

All that was required was to collect it, stuff it, and send it to the British Museum for identification and description.

After all, having a species named after you confers a certain though obscure immortality, and even today grown men occasionally fuss peevishly for the sake of taxonomic fame.
Back in 1915, a Burmese lady gave a mummified yesin to S.F. Hopwood, then Assistant Conservator of Forests and a "madly keen mahseer fisherman".
Hopwood spoke Burmese and therefore was well-acquainted with the yesin but confessed he had always thought it was just a mouse deer.
The lady had paid 5 Rupees for it, and the seller had gotten it from an old Burman who had come to her door seeking a cup of water.
In Hopwood's words, "She gave him the drink and asked what he had in the bag. He said that he was a fisherman and had caught a water-elephant in his nets. It had lived 3 days after he caught it.  He wanted to sell it for Rs 25, but she succeeded in getting it into her possession and sold it to her for Rs 5."

The curious yesin owner consigned the mummy to Hopwood, who shipped it across the Bay of Bengal to the Bombay Natural History Society (BNHS) asking its true identity and requesting that it be returned, "as the present owner values it very highly . . ."

The editors of the BNHS Journal reported that it was a "a wonderful curio" fashioned from a squirrel skin.

Its maker had painstakingly stretched the hide to render a hump and a vestigial trunk and had supplied it with miniature faux tusks.

It was a remarkable feat of taxidermic fakery.

Now you may not believe it, but the codger had a similar yesin experience.

It happened during tea break at an elephant workshop in Rangoon where I engaged two bashful ladies on the sidelines in small talk.

They had been sent as observers by the University and were obviously not feeling a part of the predominantly male in-group.


"Do you know yesin?", asked the Karen lady.
"Yezin the town? Or yesin the water elephant?" was my childish display of Burmese knowledge.
"Water elephant" she said with a frown.
"Ah yes, that yesin," said I, "but I have never seen one. Is there really such a thing?"
" I have a. . .a . . .(she searched for the words). . .a small bone."
"My grandfather owned elephants. The yesin belong him.  I will show tomorrow."
Sure enough, the next day she handed me a small cardboard box of the kind made for jewelry.
Inside was a rodent's mandible cushioned in cotton. 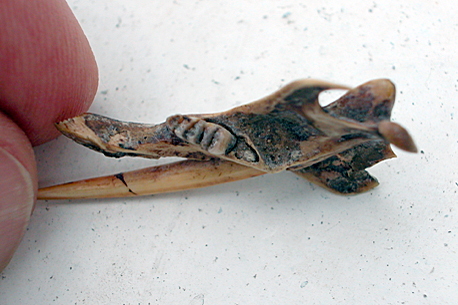 The yesin's maker had inserted a tusk into the foramen on the lingual or inner surface of the jaw, but I didn't divulge my thoughts.
It was admirably done, and I just savored it as a fake, a relic, and an unsolved mystery.

I might as well have been handling a ruby from King Theebaw's throne.

What motivated grown men to fabricate yesins?
Was crafting a yesin like carving an image of the Buddha?  Did the ersatz yesin confer power or profit to the owner?
My adoration ended, I tucked it into the box of cotton and returned it to its owner.

"You may have it,"she said.


I was touched but demurred.

After all, it was a family heirloom.

[to be continued]
Reference

Great story. Cryptozoology is such a guilty pleasure for me. The folklore alone is fascinating even if I know these creatures do not exist, at least as described.

The Science article is interesting for the soap opera stand point but also from a scientific stand point. I have a hard time seeing how the ProAves publication can be deemed legitimate as it was published in their own in house journal and therefore is lacking in an honest peer-review process. That alone invalidates it in my mind even if everything stated in the paper is technically correct. I certainly appreciate their effort to describe species without collecting. Modern photography and advanced genetics can go nearly as far as a preserved specimen (maybe further depending on preservation techniques), but it is just bad science to not go through a peer-review process no matter how much we all hate it and think it is flawed.

A similar sketchy species description happened in herp-cicles a few years ago.

A fella named Hoser published a complete reclassification of rattlesnakes (currently restricted to the genuses Crotalus and Sistrurus) and split them into no less than NINE genera..and like seven sub-genera.

He uses other published works and (from what I can tell) gut-feelings for his redistribution of these snakes (not new data that he obtained). He also calls one of the genera "Hoserea". As you know, it's not acceptable to name something after oneself...but he claims this was done in honor of his wife (?)

It was published in the Australian Journal of Herpetology...of which Hoser is the editor.

The publication can be viewed here.

As you may imagine, this was not adopted by the herp community.

Fresh water mammals exist in Madagascar (Limnogale) and the Cameroons (Potomagale); there is a highly aquatic shrew in China. In all cases they are elusive and difficult to trap. Burma and Thailand may have one that would trap in a metal funnel European eel trap of the sort we used to trap Limnogale some years ago.

I can't believe you would lead me into a great story and then stop till the next episode...

I have seen things that are difficult to explain with animals and would not disbelieve anything, but would be skeptical on some.

Can't wait till the next episode.

What a wonderful article about the Yesin. It takes me back to times I have seen at various business establishments in the West a wall hanging of a Jackalope. I always wonder what some folks, especially out of country folks, think of that critter and what tales they regale to there friends when they return home. While with a buddy of mine visiting Ecuador several years ago we were somehow talking watermelons with our guide. My buddy, ever the joker, said that we had in the US a water melon that had no seeds but sadly it has gone extinct because there were no seeds to plant it again.
Keep up the good work, see you at the open space event.

Extremely interesting and teasingly dramatic by keeping us in suspense until the next episode.....

Trailblazer is a bogus name for a troll. Fact is all the Hoser rattlesnake taxonomy was backed up with hard mtDNA evidence and several robust phylogenies. Second fact is that many herpetologists have adopted usage of the Hoser names for the simple reason that they are correct. Example, Piesonus for the species ravus, being a better split and defined genus than the currently in use Sistrurus which Hoser showed was phylogentically within the main Crotalus group.