Snapping the toddy cat by mistake

I set the cam under an overhang for only one reason -- something had gathered and stored wild figs there, and I suspected it was a rat.
So we baited the set with a handful of cooked rice and activated the camera.
As an afterthought I dabbed the rock with castoreum, and that's when the cam snapped my picture.
A few hours later this toddy cat, or common palm civet visited the site.
(No doubt it was searching for prime coffee beans.)
There were only two pictures.
I guess it cleaned up the bait, because there was little to be seen as it made its exit.

The toddy cat was too big for the frame, but I couldn't complain.

I'd set the camera for rats, framed a small area.

Now it was time to snap the toddy cat.

We would have another shot at one. They're abundant and bold -- the ecological equivalent of our raccoon.

We just had to find a better place for a set, and next time I'll show you what we did.

(And if you're wondering about the rats, yes, one showed up shortly before dawn.) 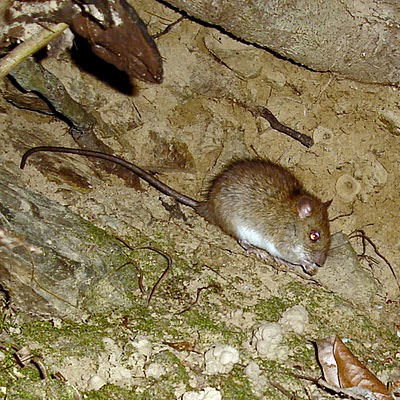