Partridges in a bush 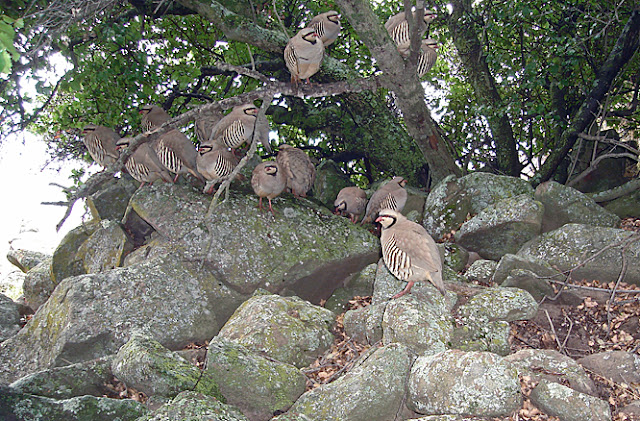 I'd never seen a chukar partridge at Chimineas until Craig sent this photo from our last camera trap set last year.

Nor have I heard its lusty chukaring call.

It's a new camera trapped bird for our Chimineas species list.

This group looks a bit fagged, possibly from climbing the hill to reach the shade of the holly-leaf cherry tree.

But maybe they were just cold.

Anyway, they loafed there near the bobcat latrine on November 19th.

Chukars are a widespread across Eurasia, and their good looks and good taste won them honorary California citizenship in 1932.

They've done well in the eastern Sierra Nevada and the inner coast range ever since.

In fact they are thick around the spring at the old toll station on Westgard Pass.

I almost slipped on the shotgun shells there.
Posted by Camera Trap Codger at 4:30 PM

I have seen them as far East as Zyzzx. Do they range into Nevada on the Eastern Sierra side?

The east side resembles the dry uplands where they range in Asia. Lots of them there I understand.

...picture doesnt work for me (the other ones do..just not this one)