I drove the Chevy to the levee -- actually it was a Subaru, and no the levee wasn't dry.

Not by any means.

It was covered with a great flotilla of cackling waterfowl, and before us on the road was a black skid, as if someone had dragged a muddy corpse from the wooded swamp on one side to a marshy set from Hitchcock's "Birds" on the other.

This was the last of my four camera trap sets in the Sacramento Valley wetlands of last December, and it certainly looked the most promising, at least for aquatic mammals.

The mudslide that led to the wooded swamp had all the signs of a busy thoroughfare, and the road on the levee was littered with scat. 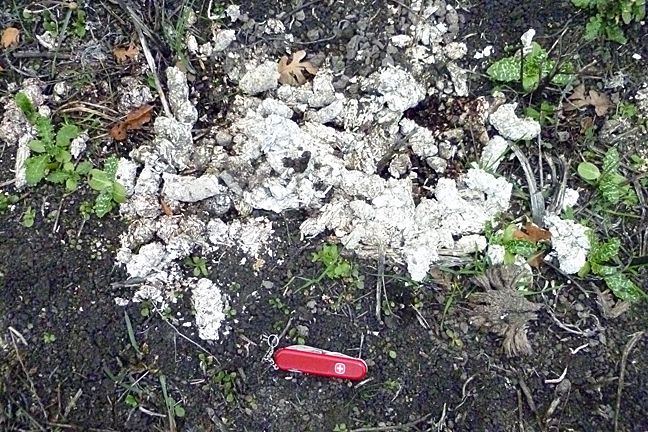 And it was promising photographically.

I hid the camera in a hummock of grass and made sure the sensor would activate at the maximum distance, where the animals emerged from the water.

The critters had to climb up the mud slide past the camera to reach the marsh.

If going in the opposite direction they had to slide down the muddy track.

So the attraction of the site outweighed any reservations I had about the camera being discovered.

It was well hidden in the grass, and the thief would have to climb down the mud slide to see it.

Not likely, I reasoned, because the slide didn't go anywhere of interest to most people, unless you were a trapper or a poacher.

So I took a chance, and it was a mistake.

There was no sign of the it the other day when we collected the cameras.

The site was still above the high water mark; the camera didn't wash away in winter floods.

Someone had found it and taken it.

But all loses aren't equal.

I can adjust to the drowned cam U. At least I can see the pictures it took, and I can salvage a few parts for future home brews.

But a stolen camera is a very bothersome thing.
Posted by Camera Trap Codger at 9:18 PM

That is bad news... Every camera trapper's nightmare!

Sadly that's the type world we live in today.

Sorry to hear about that, Codger.

Maybe need to set a hidden cam pointing at another camera trap to get video of the culprit in action?
That would piss me off for sure!

Soon, soon GPS technology small and cheap enough to hide in a cam will be available. Imagine a thief's surprise then!