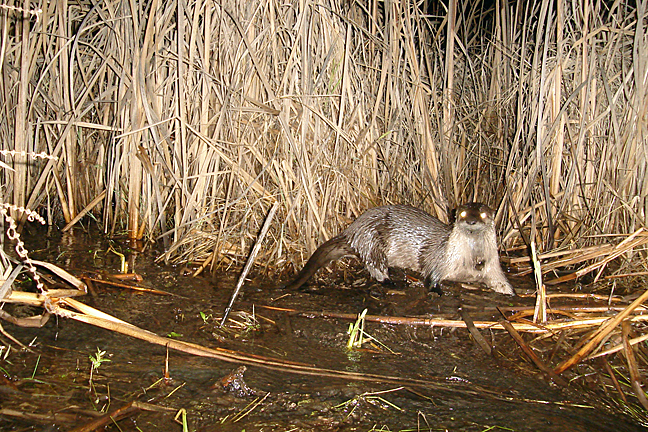 You should recognize the setting -- el paradiso de los mapaches -- and as you can see there were more than raccoons that presented themselves for portraits.
An otter passed the camera on the 8th and 14th day leaving only single photos each time.
This was the only full body shot.
The camera was set for red-eye reduction.
In the Sony s600 the camera fires three short flashes before the shutter is opened for the final flash.
The pre-flashes seem to have gotten the animal's attention and put its eyes on "low beam".
I rather like the picture, but wish the it was about 3 feet closer.
I also wonder if the thief who stole my other camera enjoyed the otter pictures it had taken.
I'd be surprised if otters didn't pass that camera too.
Posted by Camera Trap Codger at 7:01 PM

Wonderful! (But sorry to hear about the theft of your other camera!)

I wandered over here at the suggestion of rockpaperlizard.blogspot.com, and am glad I did!

As great as the raccoon pictures and this one even has more of a "animal in habitat" feel which is great.

I really like the habitat aspect of that shot too, Codge. But, some close-ups are also always nice...