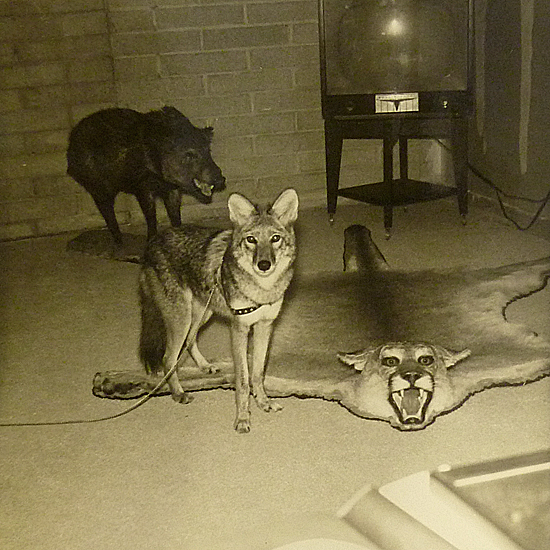 "I have your interesting letter of October 20, with picture of your 6 months old red wolf; I am very appreciative of the picture as it is a beauty."  Letter of Stanley P. Young to Bob Housholder, Oct. 24, 1958 (Smithsonian Archives).

Lobita looked a lot like a coyote, except that her muzzle was a bit thick.

It's quite likely that coyote blood ran through her veins, but her ancestors also included wolves, in particular the small enigmatic canids of the southeastern US known as red wolves.

Young wrote of the photo, "after viewing this young animal I was of the opinion that you have obtained a true red wolf - my opinion being based on coloration, size of the animal, and geographical grounds, bearing in mind the area in Oklahoma where you captured this animal."

Lobita was a 6-month-old pup when an Arizona hunter named Bob Housholder caught her in eastern Oklahoma, and took her home as a pet.

I wish I  knew how Housholder caught the pup, but Young's correspondence is the only remaining information, so we'll never know.

Lobita looked quite at home in the picture, but Housholder had failed to make the animal into a suitable pet, and that's why he wrote to the Fish and Wiildlife Service.

He had already decided to get rid of the animal.

Young responded, "It has been my experience that the female of the wolf tribe is generally the hardest to tame, even when taken before the eyes are open; so what you are experiencing with your animal runs true to form as far as my experience goes.

In a subsequent letter (October 24, 1958) Young suggested that Housholder consider donating the animal to the National Zoo, where the only specimen in the collection was an aged female.

As a retired employee of the National Zoo I wrote to my contacts there to find if Lobita ever became part of the collection.

Hoping to contact one of Houshoulder's children, I wrote to the The Grand Slam Club/Ovis founded by Housholder in 1956.

Lobita remains a snapshot from a time when a few red wolves still roamed the thickets and woodlands of the southeastern US.
Posted by Camera Trap Codger at 7:04 PM

She sure was a pretty one! I find it a bit unnerving that she was in the picture with those dead animals. The poor thing. She must have always thought she would end up like them..Ha! Noticed that very old TV in the photo also. It is a sad story and do hope you find out more someday.