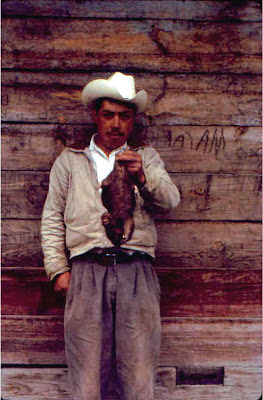 Gardening season has ended, but take note, good gardeners: the pocket gophers are gearing up for next year. That's right, the breeding season of our most abundant gopher -- Botta's pocket gopher -- is beginning right now.

Gopher is an emotionally charged word. In turf wars between man and gopher the reviled rodent always wins. The gardener may remove a few trespassers now and then, but victory is shortlived. What it boils down to is that gophers are far better at making a living than most gardeners are at circumventing gophers.

There are at least 3 dozen species of gophers (family Geomyidae) in North and Central America. They vary in size and coat characteristics from silky coated 5-inchers to burly bristle-coated bruisers the size of guinea pigs (like the one I trapped on Mt. Orizaba, Mexico, above). But all share the bauplan of subterranean root grazers, a thick-necked meaty forebody with powerful digging claws and beautifully enamaled orange incisors that can grow a millimeter a day. All of this makes them beautiful diggers. They dig with teeth and claws, and they don't gag on the dirt, because they can close their lips behind their incisors. If they were bigger, they could literally "eat corn through a picket fence".

As male gophers seek brief cohabitation rights the normally quarrelsome females become more approachable. Three weeks hence the mated females bring forth litters of 4 or 5 altricial young, which they nurse and later provide with fresh plant clippings. When five weeks have passed the mothers banish their offspring from their burrows.

Above ground and under cover of night the little beggars strike out for unoccupied turf. That's when aerial night vision predators get them. In the California foothills gophers have been calculated to account for 70% of barn owl prey by weight. The survivors settle on average about 240 meters from their mothers' burrows, but have been known to move as far as a kilometer. A gopher-free garden is a perfect place for a homeless gopher to settle.

There are a lot of gopher control products on the market, and if they reward the gardener with an occasional trapped gopher, the more consistent benefit is the workout in digging burrows. After setting a trap you normally wait several days before discovering the burrow is inactive, or you are lured to set another trap when a new mound materializes.

It goes without saying that if you want to catch gophers you had better understand how they think.

When the late raconteur naturalist Loye Miller, met Gumicindo Romero in Baja California in 1896 he had found such a man.

Romero, who owned one pair of clothes and a single shot Sharps rifle, was in Miller's words, "a really remarkable specimen, tall, rawhide tough, with a chest on him like a greyhound's."

Miller continues . . . .
"He had an interesting method of catching gophers. Coolidge offered him ten cents each for them since the trapping was slow. At the end of the first day he came back with a dollars worth of live gophers, each tied by a string around the middle and dangling from a long pole at an interval sufficient to keep it away from its neighbors. He spoke no English, but my Spanish, along with pantomime, worked out the story. The first animal had to be dug out live and tied around the waist. The next gopher hole was opened up and the captive was allowed to start down the tunnel. Then its tail was pinched to make it squeak. The rightful occupant would rush up to do battle. When their large front teeth were locked together in combat, both animals were yanked out by a jerk of the string."

With a little business training, Gumicindo would have been a rich man in Alta California.

Gophers definitely breed memories, and I have to share one with you. Many years ago Mike Bogan and I were attending the Bat Meetings in Los Angeles. Brian Robbins arranged for us to go out a day early to play golf. He took us out to a nice course, and on one fairway, as we came over a little hill, there was a maintainance fellow digging into mounds and setting gopher traps. This delighted Mike, whose macho gopher trapping buttons were immediately pushed. He dropped down beside the fellow, and proceeded to engage him in deep conversation about the proper way to set a Macabee Gopher trap. Their exchange was not hampered in the least by Mike's lack of Spanish and the fellow's limited English. Mike showed him how to dig deep enough below the mound to find where the tunnel split into two directions (they invariably do, but deeper than many folks realize). Then he showed him how to put one trap in each direction of the tunnel, and to stake out the string or wire attached to both. Standing up and dusting his hands, he nodded vigorously to his new buddy, as if to say "there you go, Amigo". At this point the guy asked Mike where he was from. "Washington, D.C.", Mike said, happy to have understood the question. Looking quizzical, the fellow asked "they gotta lot of this kind of work up there?"

That's a good one, Batfinger. Obviously the guy at the golf links saw Mike for what he truly was -- a high paid federal gopher catcher.