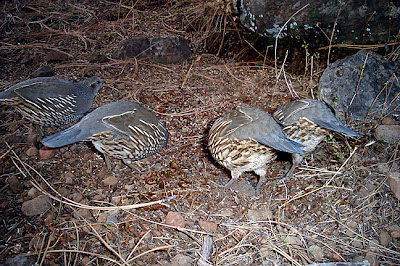 These are the four survivors of the clutch of twelve quail chicks we saw back in the summer. Looks like they might all be little hens, but maybe the one on the left is getting a macho face mask. Not sure.

I got a few chick pics back in the summer by putting the camera under foothill whitethorn next to the driveway. It was hit and miss, and none of the pictures were very good, so I started to bait with mixed bird seed. 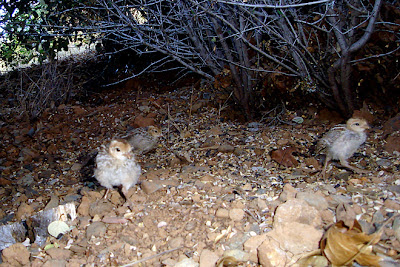 Now they are as big as adults and filling in their adult plumage. 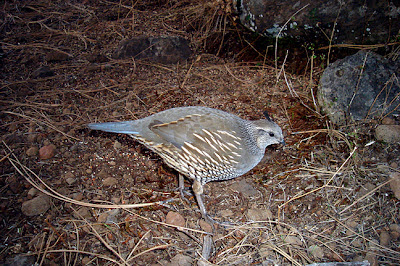 The parents are always nearby, and the male stands guard while they feed. 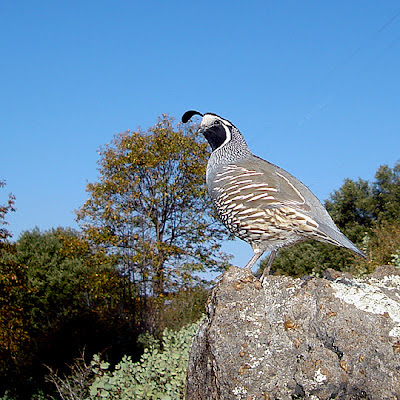 Normally the mother bird leads them about, but I haven't seen her lately, so she might have been picked off too.

California quail (the Valley quail is one of 7 subspecies) were a lot more common when I was a kid. Starker Leopold tells us that the species peaked between 1860 and 1895 in response to land use associated with settlement and crude agriculture. Grain farming and overgrazing by cattle and sheep actually improved quail habitat. In the decade after the gold rush, cattle are believed to have reached a million head, and by 1876 sheep numbered nearly 8 million. Heavy grazing fragmented the native bunch grasses, and made way for seedbearing Mediterranean forbs like filaree and clovers. Quail were better off then ever before.

The decline of quail (1895 - 1925) is blamed on intensive agriculture, habitat degradation, market hunting, and associated practices such as broadcast poisoning of ground squirrels. Hunters could bag 25-30 quail a day using dogs, a quail caller, and shotguns, and the selling price was $1 - $1.75 a dozen. In the San Joaquin valley poachers took as many as several hundred at a time using large nets at water holes. The poachers faked legal killing by hanging the dead birds in trees in bunches of 6, and shooting them with a shotgun at 30 yards. 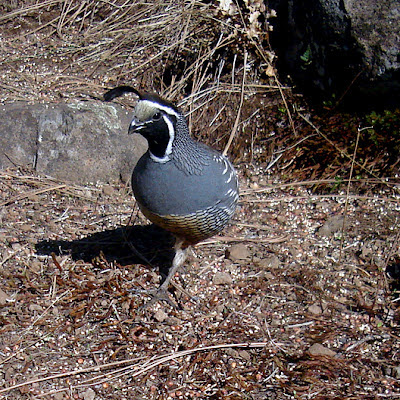 Leopold's book is a labor of love worth having. I really must heed his advice about improving habitat so I can hear the mighty assembly call, a sound from old California. It sure beats the roar of the Harley Davidsons these days.

I miss the call of the California Quail that was so familiar as a boy wandering the hills along the Russian River and Cazadero. Someday I hope to carve a pair out of wood. Your blogs continue to delight me and they are packed with solid biological information and often sprinkled with subtle humor as well as history. Aldo Leopold is one of my favorite authors and thanks to Joe Hall "A Sand county Almanac" was required reading.

Yes, they are charming little birds. I've got to find (or make) a quail call. It would be great fun calling them in now and then.

There are a surprising number of developing country wildlifers out there camera trapping with support from several big international NGOs. Neat to see their work. Thanks.