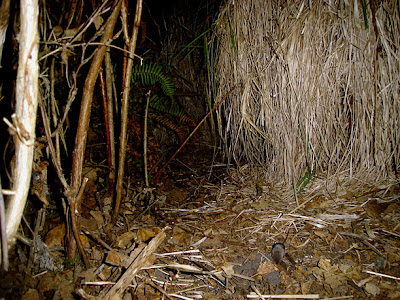 We spent a few days in San Francisco this week before visiting the camera traps at Point Reyes National Seashore.

I touched base with my old friend Ray Bandar, aka Mr. Bones, a reliable and colorful source of bay area natural history.

Ray said there are no new reports of coyotes in Golden Gate Park, but a ripe young gray whale carcass had beached south of the city and made the evening news. High tides have been scouring the beaches, so the marine mammal veterinarians moored the carcass with a rope the day before the necropsy. After they left, someone, or perhaps a group cut it loose and performed a memorial service for the deceased whale. Only in San Francisco. Then the vets did the needful, and found that the organs were in a semi-liquid state. Not long after they finished a high tide swept the scattered and stinking mess back into the sea.

Okay. Yesterday morning we headed across the Golden Gate for Point Reyes National Seashore. The weather was excellent in the bay area, but there were high winds up on Tomales Point. Rutting tule elk are one of Point Reyes's attractions these days. The elk are in hard antler, but as far as I can tell, the hard rut hasn't yet begun. The bulls seem rather laid back, and I didn't hear a single bugle call in two hours. One couple took their pictures standing beside a park service sign warning visitors that the rutting elk are dangerous: "do not approach".

My camera trapping area is a favorite loafing area for the elk, and the picture above is actually one of their trails. A month ago I set one camera nearby at an elk wallow, and the next morning a young bull thrashed it with his antlers. When I found the camera two weeks later it was intact but buried in muddy vegetation. I reassigned it to mountain beaver duty.

Down into the tangled thicket to change batteries and memory sticks. Even with a GPS it takes more time to find cameras there than you'd expect. I sat in the brush and scoped 2-weeks of pictures in each of the 3 cameras.

Drat! There was no image that faintly resembled a mountain beaver, so I moved two of the cameras to wetter areas. Then a dense fog rolled in and I backtracked to the road using the GPS.

Surprise! I just viewed the pictures on the computer, and was pleased to find a very small mammal in three pictures. I couldn't see it in the LCD yesterday. It was a shrew, the mightiest of the mini-mammalian predators! (gleeful chuckling in the background).

They were taken over a period of 18 seconds (8:53PM, August 30). You can just make out the shrew in the uncropped photo above, but I've cropped them for a better view below.

It could be any of three species (Sorex trowbridgei, S. vagrans, or S. pacificus). I am guessing it's a Trowbridge shrew. It looks large, and the tail looks bicolored. 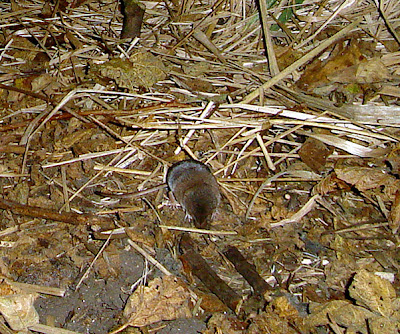 Plus, the tail seems almost as long as head and body. 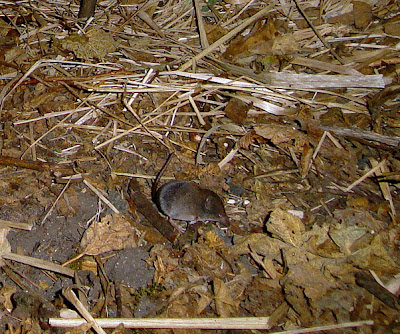 And do you see that faint line across the back? That, I would bet a bott'l o' Guinness--is a molt line.

If any of you mammalogists have an opinion about the identity of this shrew, feel free to send me a comment.

[Note: There'll be at least one more post from this outing, and then I'll be talking about animal espionage agents, and a crow that practiced proctology. Stay tuned.]
Posted by Camera Trap Codger at 2:19 PM

Jesus Maldonado agrees. Here is what he thinks:

"I think its a trowbdrigii. It is too big to be vagrans/ornatus and the color looks wrong for pacificus/sonomae."- JEM

Hello, I enjoy your blog and also think I was born 100 years too late! I am about to start a project that involves camera trapping small mammals and I was really impressed with your shrew pictures. It probably says somewhere on your blog, but I didn’t catch it…what type of camera do you use? Thanks for any info and keep up the good (fun) work.
-Jessica, Florida

Hi to Camera Trap Codger and Jessica, Don't know if you'll get this message as I've never been on this site before..?

I'm also about to start a camera trap project, in Scotland, UK, and I need to be able to capture images of small mammals too.

Camera Trap Codger, I wonder if you'd be so kind as to tell me what model of camera you use, because those pictures are far better quality then anything I've seen so far!

Many thanks,
Steph O'Connor