Tomales Point was swarming last week -- with starlings, crows, and ravens. The starlings' aerial synchronicity did justice to the blue angels. As we drove by the last dairy yards I stopped for a picture of the ravens and crows. The clever birds were uncooperative. The sorry image you see was a one-hand-out-the-window shot.

Why all the birds? I wondered.

Are they still looking for Tippy Hedren? Remember the toothsome and totally freaked-out blond in "The Birds"? Alfred Hitchcock filmed it in Bodega Bay, just up the coast from Tomales Point, and across the San Andreas fault. 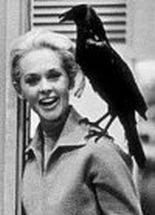 More likely they're seeking bucolic company. Great flocks of crows, and a good number of ravens are always loafing around the dairy cows. Placentas and new born calves are easy pickings for carnivores and omnivorus birds like ravens and crows, and indeed there were a few new born calves on the ground. The highly synchronous calving season of some ruminants like caribou and wildebeest, attracts predators and scavengers ( the functional response), but the predators are swamped with the surplus. (This is a version of the safety-in-numbers hypothesis.)

The association of corvids with cud chewers (and for that matter other ungulates) must be ancient. Ungulate herds attract scores of blood-, sweat-, and dung-craving insects, and as they wade through the grass the cud-chewers expose other insects, like grasshoppers to waiting birds.

The crows and ravens of Point Reyes aren't just after meat, that I am sure. I suspect that insects are the real attraction. The concentration of manure must seethe with spent dung beetles and their larvae.

Dung beetles can be as large as golf balls and as iridescent as gems. Who would have thought that a diet of shit could produce such beauty, or that coprophagous beetles could move beetle collectors to florid and passionate verbalization. The point is this: the next time you see a person or crow picking through a cow pie, you'll know they are after the same thing -- dung beetles.

I once made a bizarre observation related to this theme. I was watching Indian house crows (Corvus splendens) at the zoo in Trichur, India. The gray-mantled birds were loafing in an enclosure of sambar. About a dozen spectator crows perched on the fence watching one of their brethren. This bird was more of an inspector than a good shepherd. It hopped among the cud chewers, perched on a back or antler, and paused now and then to cock its head and inspect one of its charges .

Clearly something was going on, and I decided to hang around to find out.

Finally one of the sambar stood up, stretched, and raised its jolly roger. The deer was obviously getting ready to evacuate its bowel. Sure enough, the curious crow flew up to its back, and hopped to its rump, where it craned precariously to examine the bulging sphincter. As the bolus of pellets appeared the crow meticulously plucked one pellet from the mass, and flew off with its prize.

I was dumbfounded, but knowing that other deer would soon become active, I waited in anxious expectation. Finally another cow lazily gained its feet, and the whole scene was repeated again.

I realized I was on the threshold of scientific discovery, and in desperation looked for a way to follow the extraordinary bird or birds. Alas, there were no routes whence it went -- beyond the zoo's walls.

I envisioned the paper's title -- "Proctology in the Indian house crow" --which I would submit to the Journal of the Bombay Natural History Society.

But there were hitches. Was the proctologist a single depraved crow, or a flock of innovators? To write my paper I also had to find out what the crows did with the pellets. The mind boggles at the possibilities.

Blast! It wasn't to be. I was with others; we had a full agenda, and it was time for our next appointment. As far as I know, the proctologist crows of Trichur remain an ornithological secret.
Posted by Camera Trap Codger at 1:55 PM

They were probably eating the manure itself, as corvids are known to do.