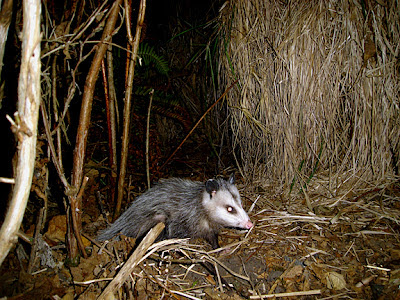 You can say what you want about possums, but any animal that still resembles its Cretaceous ancestors is okay in my book.

Several possums have passed the cameras at Point Reyes National Seashore, and I finally got an acceptable picture (above). Most pictures have been partial views, and one possum actually reached up to examine the camera. 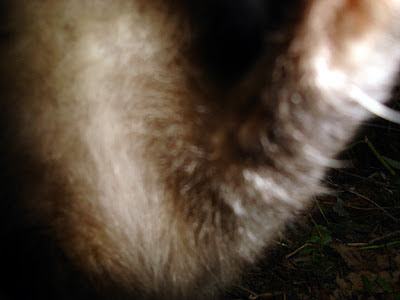 You expect curiosity from mammals with higher encephalization quotients, like bears and raccoons. But possums? Normally they show interest only food and other possums, and sometimes they get them confused. As possums go, this might have been a savant.

Since I am in a hurry, I'll devote this post to a few firsthand experiences, and save the wonders of possum biology for another time.

My first possum (many years ago) was a possum-in-the-headlights victim. It escaped the Firestone press with a severed spine, and looked intact on the outside, so a well-meaning zoology student delivered her to my lab at the University of Maryland (where I kept a large research collection of viverrids on the third floor of Sylvester Hall -- then the Zoology Building). I thought she might recover the use of her hindlegs, and welcomed the chance to learn about possums.

The adaptive value of her other trick clearly had something to do with surplus killing. When offered several mice in succession she would dispatch them instantly, and stuff them into the back of her jaws with her delicate possum paws. Then she would take a long break, as if waiting for the next command. No doubt in nature she would trundle off and eat her prey. (I've never heard of possums caching food.)

A few years later when I was gainfully employed as a curator at the Brookfield Zoo in Chicago, the switchboard operator regularly transferred queries from the curious public. One of the more common queries was about possum reproduction. I remember one call in particular that went something like this:

Caller: "Yeah, me and dis guy are having an argument about how possums do it, and I stand to make some money on it."

Caller: "He says that possums mate through the female's nose, and I says they do it the other way, like all animals. I say he's full of BLEEP."

Me: "Aha! Your friend is referring to the opossum's two-pronged penis and southern folklore . . .

So I told him that they "do it the other way", and explained that the female opossum has a duplex reproductive tract with two vaginas.

Caller: "Okay, now I want you to tell him exactly what you told me."

Several years later when we lived in rural Virginia, a rat sized possum ambled down the driveway in the headlights. I jumped out of the car and caught it by the tail. It had a certain charm, and our daughters were highly gruntled at the prospect of keeping it for a pet. But the redhead wasn't. I appealed to her sensitivity and promised that we'd let it go as soon as it got big enough to escape the big possums that are known to eat little possums.

Depending on the company, "Possie" was either a great conversation piece or the quickest way to send the neighbors home. With biologists, its appearance was an occasion for another drink, and reflective to bawdy commentary on the evolutionary success of such a homely creature. "You gotta love 'em, man!"

"Possie's" effect on nonbiologists was equally amusing. Furtive glances were followed by a brief period of polite indulgence, with perhaps a question about fleas and disease, and then the neighbors would thank you for the lovely evening.

A possum in the living room was a little trying for the redhead, who believed that her friends in town shouldn't know that we kept a possum in the house.

"Hey babe, this is VIRGINIA --the state animal is the VIRGINIA Opossum!" (Actually, the Commonwealth of Virginia has never owned up to this, though it has a state bat, a state dog, and a state fish! Disgraceful!)

More recently, a large male possum met his demise on the highway not far from our present house. It was just before Christmas and we were on our way home after eating out. I wanted to pull over to get it, but the family protested. I returned secretly in the night to rescue it from highway desecration.

The next day I placed it in a small opening in the chaparral. For three weeks it lay in peaceful repose before the camera trap. Skunks, gray foxes, and a bear visited, but no one touched it. 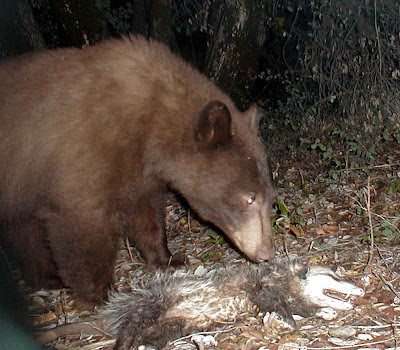 Apparently he didn't smell good enough for a mammal to eat. Finally the vultures came and finished him off.
Posted by Camera Trap Codger at 9:06 AM

(I reposted this comment because I forgot the link to the lion picture and story).

Thanks guys. Much appreciated. Cool seeing the Minnesota cougar, too, Patrick. I'm in touch with several Minnesota camera trappers, and they get lots of bear and a few fisher pictures, but never cougars. With all the deer in those north woods, you wonder why.

As always I greatly enjoyed your recent posts. The images of the shrew are great, looks like a molt line across the back. The earliest fossil identified as representing Didelphis is Miocene (also when first Canis and Felis appear). Virginia opossums are an interesting species; immune to pit viper venoms (snakes are common prey items), refractory to rabies, and resistant to the ravages of malaria. They also are light inhibited (a significant factor since we can’t see in the dark) and this is one of the reason they are considered so slow and dull. Incidentally, I have caught several Virginia opossums by grabbing the tail. Tried that only once with a Didelphis marsupialis; the animal had my hand in its mouth in an instant. Can be used as a test to see which species you have in areas where they are sympatric (northeastern Mexico to north central Costa Rica ). I have a female in captivity at the moment and probably will rehab her to the wild soon. I want to test self anointing behavior with her before she is released. I was told she was dark phase, but no she is normal. I would dearly love to get a live black-phase Virginia opossum to test the genetics of that coat color.

Hi! I was just perusing google in search of possum pictures (I adore possums) and came across your blog. I just read this section, but I wanted to thank you for moving that male possum from the road.

I move roadkill too because I feel it's just not right for animals to rot on pavement. That's not where they're supposed to be.

It always warms me to know others feel the same and are willing to do something about it. So thank you. C:

Thanks for clearing up a tale told to my impressionable 12 year old!!! We are from Virginia and he was ready to tell the world the possums, "do it through the nose"...nice pictures too.

Thanks for this worthy article, it's very conspicuous blogs