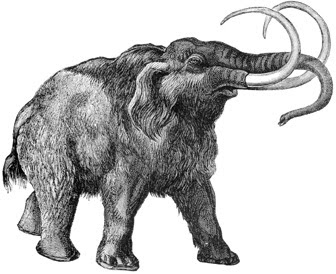 
Something neat happened last week. Construction workers in downtown Stockton drilled up a pile of mammoth bones. They were 80 feet down. In case you don't know where Stockton is, it's 80 miles east of San Francisco -- a Central Valley town on the deep fertile silt of the California delta.

Here's the fun part. The construction workers thought they had found human bones and called the coroner's office. Since the femur was as tall as the coroner, it could only have been a murdered NFL player. This is what happens when you watch CSI and its ilk instead of NOVA. But to their credit the workmen reported it, and for that they deserve a few "attaboys".

The news even fired up a few people who were sufficiently moved to comment. "Pissed off", for example, averred that "It's awesome to know that such huge beasts roamed locally." I agree.

My mammalogist friend Frank Iwen used to assist paleontologist John Dallman in prospecting for mammoth bones. When farmers called the University of Wisconsin's Zoological Museum about giant bones, these two packed their gear and headed for the field.

The best time of year for prospecting mammoth bones is in the spring when Wisconsin's deep glacial loess is moist and loose from freezing and thawing. But you need the right tool -- a smooth spring steel rod about an eight inch thick and 8 - 10 feet long. This you bore into the ground with the attached T-handle.

The chance of locating bones is slim at best, so you have to look for fragments in likely places like drainage ditches and cut banks. Then you start to plumb with the rod. The sound of the rod tapping the object tells you whether it is bone, rock or wood. They all sound different. You need patience and a discriminating ear.

One of my treasued belongings is a large shard of mammoth leg bone from a cobble bar on the Lawrence river, Kansas. All kinds of wonderful bones from ground sloth to giant beaver tumble from the eroded banks in the river's spring floods, and often settle on cobble bars. One blistering August day back in the 80s the family scoured that island like beagles, and I was the only one who couldn't find any bones. Embarrassing, but the girls let me curate the collection.

It was sheer luck that the foundation of the $110 million San Joaquin County administration office was over the old elephant. Wouldn't it be awesome to have a full size bronze mammoth before the entrance. We need reminders like that for folks who think the world started 6000 years ago.
Posted by Camera Trap Codger at 10:56 AM

I found your blog by accident and find it interesting. I happen to be your cousin, Harvey Marcher. We were close as young teenagers catching crawfish behind your house I think in Woodside but am not sure. I am in good health living in Grand Bay Al. (Just west of Mobile)Did 3 years in the Army. Went to Viet Nam for 2 yrs for a civiliam contractor. Worked 17 yrs as a professional diver. Rotunely dove to -500'.Quit in my 40's when decompression wasn't working well and started getting the bends. Am still working. I am running underwater projects using divers and ROV's (Unmanned Submarines) Killing live oil and gas wells on platforms knocked over by hurricanes Ivan and Katrina. Tell you more if you respond to thie e-mail.

Hi Butch! What a treat to connect with the Marchers. I remember those days well, and was in touch with Hans and Helga through my Mom till the end. I've also passed on a lot of the Marcher family history to Sydney Embrey -- grand daughter of Fred. E-mail me at chindwin@sbcglobal.net.
cheers,
chris