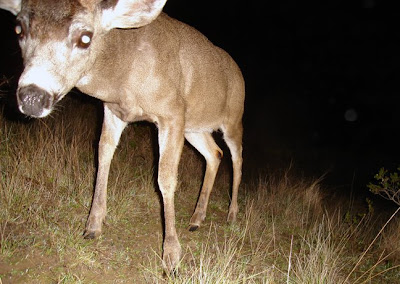 The tarsal organ is that dark patch of hair on the inside of this buck's hindleg.

It's one of the black-tailed deer's 5 specialized skin glands, and it is also the most obvious and complex.
The organ is a thickened patch of glandular skin, covered with coarse bristly hair, and each hair has an unusually large  arrector pili muscle.

The skin of the organ is deeply embedded with sebaceous and sudorifierous glands, meaning it produces BO's dynamic duo --sweat and sebum (or skin oil).
The arrector pili seem to control the dissipation of the scent. When they contract they probably squeeze the glandular products to the surface. By raising and flattening the hair they also likely control the dissipation of the scent.
Black-tailed deer aren't alone in having tarsal glands. White-tailed deer, caribou and their domesticated relative, the reindeer also have them, as well as the Latin American brocket deer. They seem to be a communication mechanism that evolved in the New World deer (elk, with their roots in the Old World, lack them).
The glands are variously developed in each of these species, but all of them hunch awkwardly and pee on their glands while rubbing them together.
This rub-urinating is a visual and olfactory signal to other deer. Black-tailed does prolong urination when rubbing. Rather than let it flow, they dribble.
My masters advisor, Dietland Muller-Schwarze observed fawns to spontaneously  rub-urinate soon after birth, and in response to separation from their dams. It seems to serve as an olfactory separation signal.
He also saw it in aggressive encounters, when it follows lateral displays of competing bucks. This often leads to increased distance between rivals.
Rutting bucks, especially older ones,  spend so much time rub-urinating that they stain their legs. 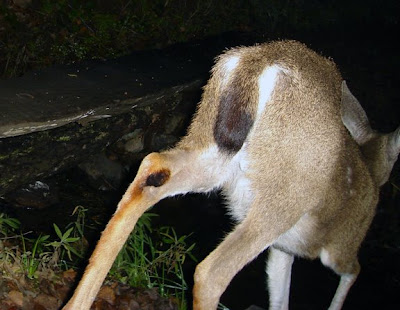 Like an overworked and unwashed kitchen sponge, the sweaty, oily, urine-soaked patch of hair is an ideal fermentation site. What's more, the hairs are specialized to hold the secretions -- hence the term osmetrichia.
The fermenting mixture clinging to those hairs makes for a potent brew.
Words can't do justice to the smell of the tarsal organ. Let's just say it is strong, but not a particularly unpleasant odor (if you're a mammalogist).
Karl Miller and his graduate students conservatively identified 34 species of bacteria in the tarsal tufts of white-tailed deer.
Does had fewer bacteria than bucks, and only one kind of bacteria was exclusive to does. Bucks on the other hand had nine exclusively male bacteria.
The relative abundance of bacterial species also differed among individuals, which means that the tarsal tuft's odor and its intensity may very well give each animal it own BO signature.
Supporting this view is the observation that all deer of all ages indulge in rub-urination.
Miller's group suggested that heavy staining of the legs below the gland may result from higher levels of steroid excretion in males. One bacteria, Corynebacterium xerosis -- the same one that produces human underarm odor -- is known to convert odorless steroids in apocrine (=sweat) secretions into smelly ones.
It stands to reason that white-tails may be able to detect one another's dominance rank from the intensity of the sex hormone metabolites in the tarsal organ.
Miller has taken it a step further, suggesting that all that bucks' glandular secretions and pissing may affect the reproductive cycle of the does they court, possibly by accelerating estrus. Pheromones of other mammals are known to synchronize estrus or cause abortion, so why not deer? It's a subject ripe for study. 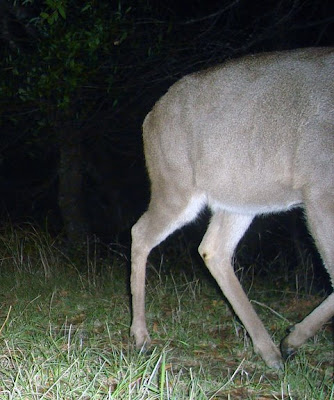 Ha. Ripe indeed. Now I know why I chose herpetology.

Now I feel stupid. I always thought the deer (whose pictures were taken with my camera trap) had an injury there, and wondered why all the deer had the same problem.

I'm in trouble with daughter Jayla, but we'll go over the leg bones of deer when she visits.

You may be a snake chaser Hugh, but you're kind of an all-rounder, with dangerous inclinations to homeotherms. There is always hope for those who get off on mole hills and Microtus runways.

I love your work. Your blog is fantastic. I am a painter living and working in Providence, RI. I have lately been painting camera trap photos from National Geographic. I am looking for a photo of a polar bear at night. Have you ever seen one? I would love to paint many of your pictures too. I couldn't find an email address for you, but if you could spare some time, I would be honored to chat with you.
Thank you,
Buck.

That was interesting, I didn't expect the same bacteria that causes human under-arm apocrine scent to be in the deer's tarsal gland, might work in favor of a deer hunter.

Wonderful and very informative entry about tarsal organs. Thank you. You mention that the scent of the tarsal glands is potent but not unpleasant. Would you be able to describe the smell more fully? Is it musky? does it remind you of anything else? I'm trying to imagine what it might be like... thank you!