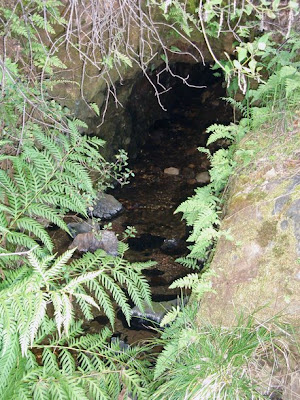 You can't miss it when you are this close. 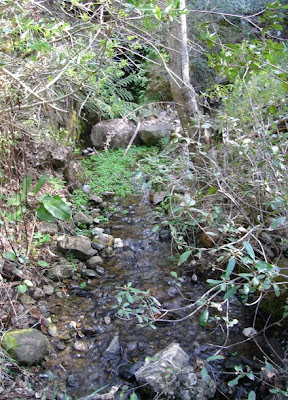 But  you won't know you have arrived a little further down the creek.
The old mine is pretty well overgrown these days, but cans, broken china, cans and old bottles   date it back to its heyday from 1860 to the 90s, with aftershocks of activity until the 1930s.
There was sporadic digging after WWII, and at some point in time someone installed a gate limiting access. Some law abiding citizens tore it down and now it lies near the entrance.
Indian Spring Mine is a drift mine, and when DC and his son Brent and I visited last Friday, crystal clear cold water debouched from the tunnel.
Directly beneath the channel of Indian Spring itself the tunnel taps into bedrock at a slight incline.
Tree roots hang in the entrance, and there are a couple of recently collapsed walls. 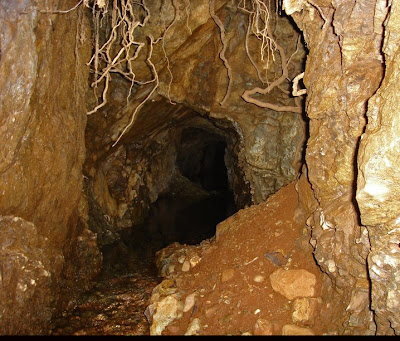 We weren't prepared to wade into its depths, and saw no signs of bats. 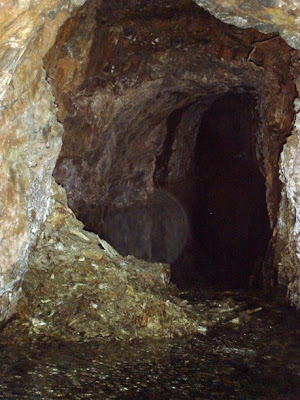 After exploring the mine itself, we followed Indian Spring to a lava cap where water trickled into the channel.
This rather puny flow disappears in the ground nearby, but apparently joins the deeper flow that emerges from the mine. 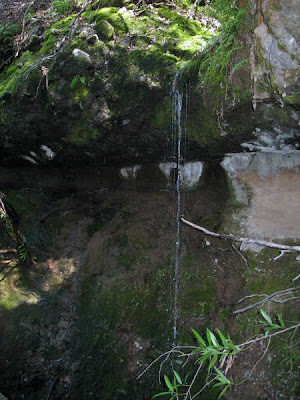 This is a year round source of water, but there is enough human traffic to make it a security risk for camera trapping.  A pity.
[Thanks to D.C.-- a fellow GPSer, for suggesting the outing, and for the use of the last photo.]
Posted by Camera Trap Codger at 7:34 PM

That is really cool. I am from the area, and would like to know more about it.

You need to go check it out yourself, but I don't recommend entering it. You can find it on the Paradise East topo map.

I have actually been in there recently. And would like to know more about it's history? How were your experiences in the mine?