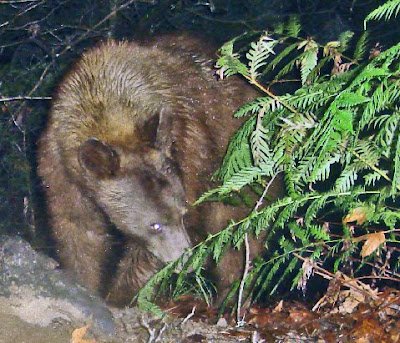 Rich Tenaza just sent me this and several other pictures of a young adult blond-colored bear at the Cleary Reserve.

Bears are known to do that, even though they sleep most of the winter.
Posted by Camera Trap Codger at 7:20 PM

Didn't know how to send you an email, but thought you and your readers would enjoy this latest shot of a wolverine in the Sierra Nevada:
http://my.lincolnnewsmessenger.com/detail/108823.html

There's actually video of it going for the cut of meat in the bait station, but I can't find a web link for it.

Many thanks, John for the link. That ol' wolverine gets around. I wonder how far it is from my digs up here.

Wow that is awesome!