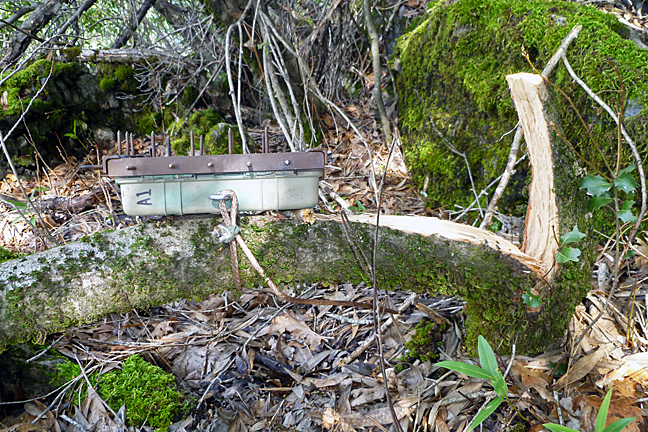 Wet weather delayed my return to the beer can highway, but when it dried up I checked the cams.

I surmounted the cut bank without acrobatics and bee-lined to the camera, which was facing the sky.

The woodworked sapling had snapped under a snow load.

I knew at a glance that the case contained water. The fresnel lens always has the weakest seal in my home brews. 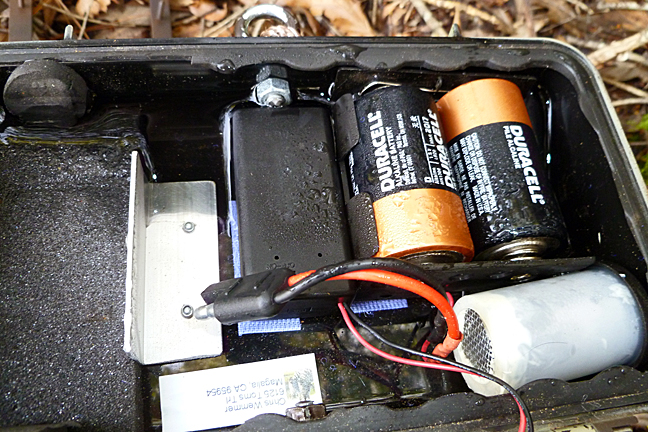 The LCD was fogged, the D-cells were taking a bath, and the silica gel container was soaked.

But the camera fired up and I quickly clicked through the pictures. 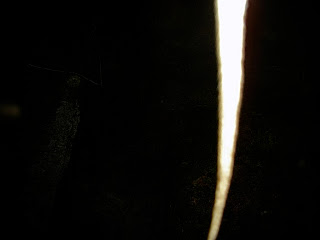 I could only make out two species: the  neighborhood wood rat hung its tail over the lens and a gray fox posed demurely.

The other two cams had even less to show, but I was still high from the Burma trip, so I could afford to be reflective. 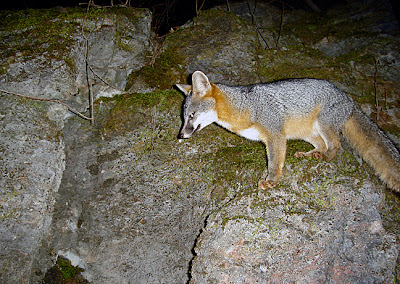 When I downloaded the photos at home, however I found a pleasing wood rat portrait, 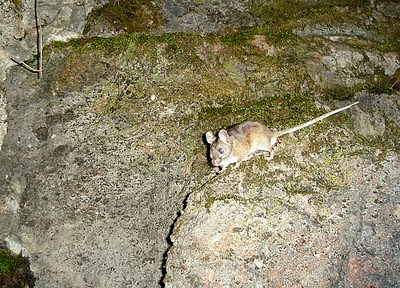 and the unmistakeable tail of a ringtail. 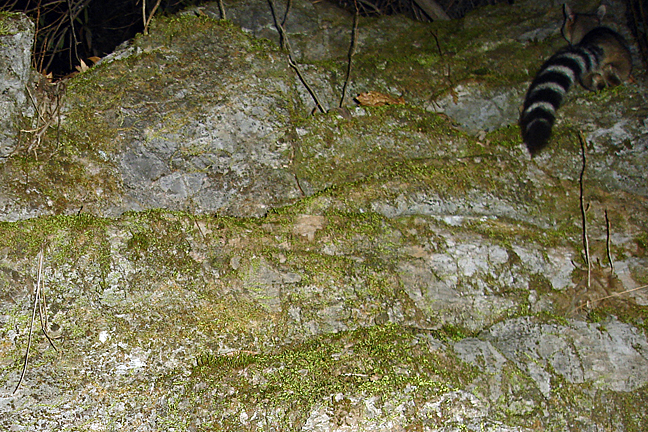 There was only one other photo -- of the ringtail sniffing castoreum and looking patently stupified. 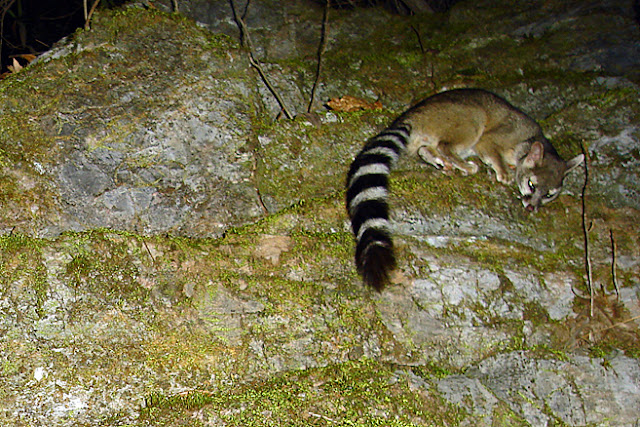 With a year and half of camera trapping on the Chimineas, I believe that Chimineas's ringtails are few and far between, but we are not ready to throw in the towel yet.
We've just got to climb down into those deep rocky canyons and set cams near water and dense cover.
By the way, I dried the camera and controller over the wood burning stove, and they are again in working condition.
Posted by Camera Trap Codger at 7:56 PM

Great capture Codger. There are a couple of historical records of ringtails in the SC mountains but my guess is they are all gone. Did you ever see any when you were growing up here?

I hope you get one at Chimineas but congrats on the local one. I would love to see more photos of them.

Cam-trapping ringtails on the Chimineas Ranch is a beeeeg challenge. Seems to be marginal habitat, and they may be quite spotty there.

They could still be there in Sta Cruz County, JK. At least I'd like to believe they are. Problem is you can't get to the cliffy sections of the San Lorenzo River very easily these days. Private property and fences. Pit bulls. Paranoid people. But I know where I'd look. Stealth camming, mann.

Congratulations, Codger! Great images and fun posts, though I yelled at you yesterday for leaving me in suspense...

Wow! Great photos (including that very nice gray fox pic)! Wish we had ringtails 'round here :)

Big congrats on finding the ringtail! I'd love to do some stealth camming in the mountains around Santa Barbara. I'd be happy just getting a few bobcats and foxes.

Great ringtail shot. There are some here too, but they are so reclusive ... I am interested in your choice of habitat and am trying to figure out the local equivalent.

Chas -- look for them where there are cliffs, extensive outcrops, and rimrock, but not too far from a creek or spring. Cover in the form of brush/chaparral. They are in the ponderosa here too, as long as there is steep rockscape nearby. My first ringtail however was cammed in chaparral far from cliffs.

Fantastic find Chris. It looks like you have it dialed in up there. Keep it up!