A camera trap with tunnel vision 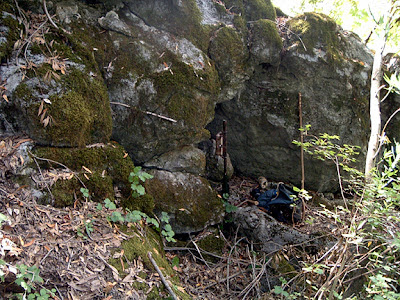 In one of the ravines not far from here there's an outcropping that has a short tunnel through it. This outcropping is actually a moss covered pinnacle of a soft gray-colored stone, and I'm not sure whether the tunnel is a natural formation, or resulted from miners playing with dynamite a hundred or more years ago.

For a couple months I've wondered if the tunnel would make a decent set for a camera trap. My idea was to place the camera at one end of the tunnel and then try to lure critters to the camera from the other end. It might make an unusual picture.

I hadn't visited the site since late winter, so I made a brief recce to convince myself it was feasible.

It was, but I might have to make two trips to get the set ready. The limiting factor would be finding a place to anchor a steel post for the camera mount. If I couldn't set a post, I might have to juryrig a camera mount that could be set right in the tunnel. That would require an appropriate length of pipe with a strong compression spring to hold it in place. If you don't know what I'm talking about maybe you have seen a spring-loaded pull-up bar in a door jam. That's the idea. I'd have to mount the camera in the middle of it.

A week later I packed my rucksack, filled the water bottle, "pre-hydrated" by guzzling Gatorade, and sprayed myself with insect repellent.

Wonderful! On the East (uphill) side of the tunnel there was a crack in the rock base. I drove in the 2 foot length of steel post with a hand sledge. It fit as snug as a bug in a rug. It would take a Herculean effort for me to extract it, but it was comforting to know that even a bear with the strength of Arnold Schwartzneggar would have trouble tearing it loose. 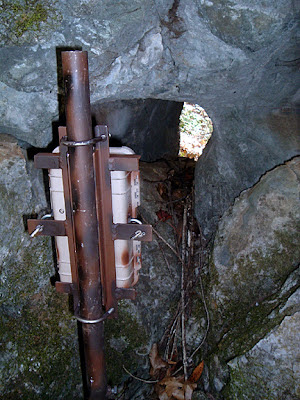 I mounted the camera on the pipe, tightened the mounting screw and stood there admiring my handiwork. Something was missing and I started to curse. I had forgotten to pack the bear protector -- the spiked frame for the camera case. A cantankerous bear could still chew it up even if the post was anchored in cement. Forget about it, I told myself. You can fix it next week.

A few words about my plan. If small mammals visited the site, it didn't matter which end of the tunnel then entered. There was enough space inside for them to turn around. But if a bear or mountain lion came, I wanted it to enter facing the camera. That means I had to attract them from the west side. 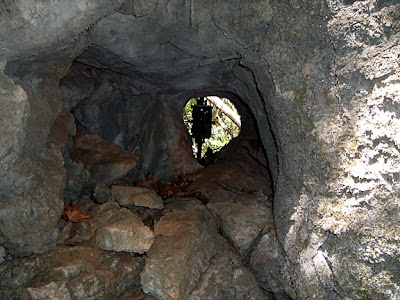 I climbed to the top of the pinnacle and suspended the FurFindr (a digital recording of a squalling rabbit) from a tree limb about 6 feet above the tunnel's west side. I switched it on; the rabbit squalled twice. It was now ready to start at sun set. Then I tucked two dead mice into crevices in the middle of the tunnel, and dabbed castoreum between them.

If the plan works, the predator will hear the squalling rabbit from the downhill (west) side. If it comes from the east, it will hopefully move to the downhill side where the sound is loudest. Then it will pick up the scent coming from the tunnel, because breezes move downhill at night. Next, it will look in the tunnel, and if all works well, it will crawl partially inside to snort beaver scent and eat mice.

I switched on the power, climbed around the rock to the other side, and did the "walk test". The red light on the passive infra-red sensor blinked whenever I moved. A minute later it blinked 5 times, and the lens extended.

The set was ready. 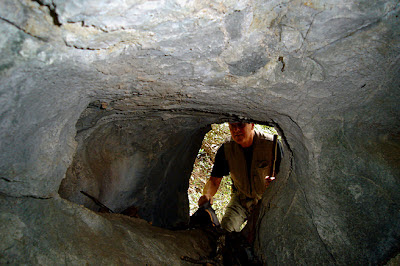 [Stay tuned: In the next post you will learn who is dumb enough to go into the tunnel.]
Posted by Camera Trap Codger at 7:34 PM

Wow, I didn't realize the planning that must go into using a camera trap in this way. Fascinating, and I can't wait to see what enters the tunnel.

Words,
This set was a little fancier than most, but without the caller and bait and scent, the chances are I'd only get wood rats and deer mice. And when a set like this works, it's quite a thrill. Of course, the surprises (i.e., the totally unexpected) are just as exciting.