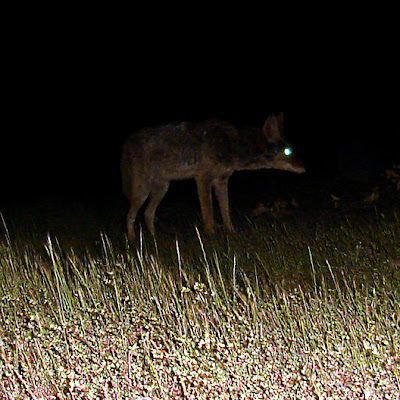 There was a flap in San Francisco last week. A pair of coyotes living in Golden Gate Park had a territorial dispute with a couple of leashed Rhodesian Ridgebacks. The authorities decided there was a clear and present danger to pets, and the two coyotes were shot. There was a hue and cry from both sides of the fence, but coyote sympathizers seem to be in the majority.

Coyotes have been reclaiming parts of San Francisco for several years now. They trickle in from the thick coastal scrub south of the city in the San Bruno Hills and San Mateo County where they have always lived. Wildlife biologists estimate there are less than a dozen urban coyotes in the city. The best coyote habitat is Land's End -- the steep cliffy area beyond the Golden Gate. The Presidio, McLaren Park, Lake Merced, and Bernal Heights also have their wild patches and a few coyotes too.

More recently at least one pair of coyotes took up residence in Golden Gate Park. The park has plenty of food. There has always been a bountiful population of brush rabbits and pocket gophers, and the house mice used to breed by the bushel when the mounted police composted hay from the horse stables. It also has a lot of people

Until now the coyotes have been good citizens. Though they were frequently spotted by park visitors, they kept a low profile, didn't sing, and fed on local game. But apparently they became fed up with canine intruders. A steady procession of bizarre-looking dogs visited the park with their owners. Some looked like food, some looked like rivals. To the coyotes they were fair game.

The ill-fated pair was most intimidated by the Rhodesian Ridgebacks. They were three times bigger than themselves, and they stirred the purest of canine emotions -- deep passionate blood red aggression. So they attacked the ridgebacks. The melee was just a dogfight, but it freaked out the owner and injured one of the dogs. (It needed stitches) The next day (last Sunday) a dog walker showed up on their turf with two Jack Russell terriers and 2 bigger dogs. The coyotes showed "culinary interest" in the Jack Russells, but the bigger dogs chased them off.

The die was cast. That night the authorities (USDA Animal Control specialists) lured them in with a predator call, and shot them with "a small hunting rifle".

Officials observed that coyotes are normally retiring around people, and that such bold conduct is uncharacteristic.

This is true, but these coyotes couldn't really get away from people, could they? If they didn't adjust to people, they would have stressed out and lost it. If a muni bus didn't get them first, they would have died with adrenal glands the size of tennis balls.

The problem is this: the songdogs had flouted a cardinal rule. "Always keep your distance from people and their pets. The pooch may look like food, but don't go there. And don't eat garbage. It may smell good, and it may be easier to find, but gophers and rabbits are better for you.

"Remember that human society is hard to fathom. Dogs may fight each other, chase cats, bark at the moon, and eat garbage, but don't kid yourself. You are not that kind of dog. For you the rules are different.

And nature lovers, there is a message here for you too. You may have and enjoy your urban "yotes" as long as they live by the rules. Even in the great city of St. Francis, bad coyotes must die so good coyotes may live.

It's part of the evolutionary play. In a few decades, your grandchildren will feed urban coyotes just like the pigeons at Union Square. By then they may even do a few tricks for a handout.

As for me, I'll take the wild coyotes with all their faults.
Posted by Camera Trap Codger at 9:12 PM

Chris
Your coyote stuff is too good.
Bravo

Wait 'till a pet dog is killed, or people begin to feed'm and a child is bitten (worse yet, killed) by a bold coyote, or a rabid coyote is found in the immediate area. Then the tide will shift. Ah, the schizoid public. They have aversion to headless heart. We all know they approach wildlife issues with more emotion than empirical evidence. Well, enough said for the day, thanks.

Quick question related to former posts ... Any suggestions on where to get castoreum? I could only find either a 12ml bottle or a rather expensive ($150+) 12 ounce bottle, both sold by a perfume store.

Also, how much to you typically use? (e.g for the pictures that resulted in the fox "lying" on it?
Do you just dab the soil with a few drops? Would 12ml be enough for several uses?

ojb,
Google trappers supplies for castoreum. At Cumberland's Northwest Trapper's Supply it goes for about $4.00 an oz.and you still have to pay shipping. I think you can dilute it with a neutral oil like glycerine, though I haven't done that yet, and you don't have to use much to get their attention. Put it on a solid surface, like a log or a rock. Foxes will do the same tricks for fish oil and the real stinky predator lures. Good luck.

Thanks much for the reply.

Interesting about the poor Coyotes. They seem to be universally disliked. My brother John's neighbour told me "I dropped one in the driveway. They aren't any good for anything".