On river rovers and camp raiders 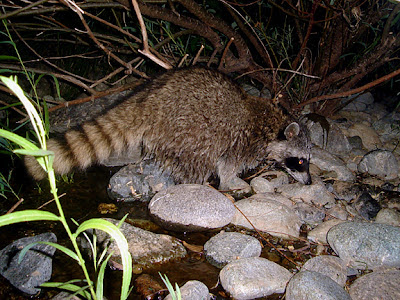 You're looking at a true river rover. This raccoon plys the river banks and shallows in the summer. It doesn't depend on people for food, though it won't hesitate to feast on their leavings -- fish guts, unused bait, and junk food. Its usual diet is revealed in its scat -- crayfish and aquatic insects, with occasional frogs and fish. In the winter and spring, when the creeks are in spate, I imagine it works the uplands for food.

That raccoon came to a set I made on a cobble bar in Butte Creek, a couple miles from my house. It's down there behind the boulder in that patch of willows near the left hand bank. 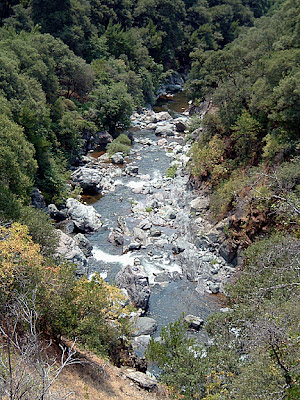 The only human habitation in the area was a "California fixer-upper" tucked in a gulch between the PG&E flume and the creek. Finding prime riverfront property for a bargain $999,999 was an unexpected surprise. 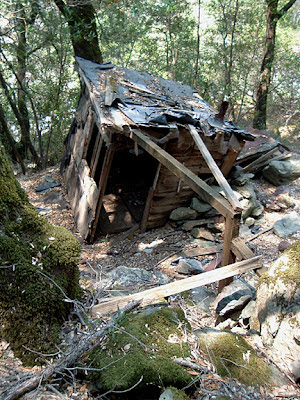 Okay okay, I'm pulling your leg. It was an abandoned miner's shack. There's a spillgate on the flume up the hill from the shack, and a sign intended for latter day sourdoughs, hikers, and codgers like me. It informs you that the gulch below the flume could flood from diverted water at any moment and without warning. (So much for gold miners and common sense.)

The prospect of a deluge didn't worry me either, but the presence of miners would have sent me packing. The beer cans however were old, so I knew they hadn't been around for a few years.

I climbed down to the creek, found the cobble bar, and put a tablespoon of "predator stink" on a rock, thinking a family of otters would show. No such luck. Six days passed before the coon waded out to explore the smelly rock. It sniffed it and was gone in 23 seconds. I got 4 rather disappointing pictures. 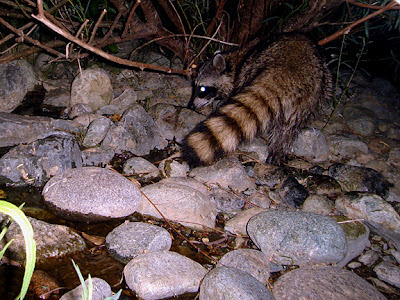 Raccoons are comfortable city and town dwellers, which may explain why they don't visit my camera traps. Why wander the chaparral and ravines for slim pickings when the neighborhood offers a smorgasbord? The two settings breed different kinds of animals--the trim retiring river rover you see here, and brash rotund coons of city, town, and campground.

Back in the 80s we had an amusing experience with Minnesota's camp raiding coons. It was late August and we were on the long trip home from Glacier National Park. The girls and I had just pitched our tents in Itasca State Park, and the redhead was dutifully starting dinner. Our rations were low. I had been advised to stop at a grocery store, but we were "in the boonies", and none turned up.

My wife didn't buy my feeble excuse, ("I guess Norwegian bachelor farmers grow everything they eat."). I was informed that men couldn't take directions, and as a consequence we would be eating leftovers.

Normally this wouldn't be bad news. The redhead is a gifted chef. But we were down to a plastic bag of limp carrots and a can of refried beans. As she scraped black spots from the carrots, my daughters protested, "Mo'om!".

Then the wonderful aroma of barbecued chicken wafted into our camp.

"You know, sweetie, one of these times we should splurge and buy some chicken or steaks. These Minnesotans know how to do it up right." It was a wistful thought, and the girls chimed in their endorsement.

As we basked in the bouquet of sizzling chicken, and forlornly anticipated our own humble meal a great howl of pathos rose from the neighboring campsite.

I mosied over to find 4 large raccoons on the picnic table amidst a mouthwatering repast of barbecued chicken and corn. Grandma and mom were unceremoniously crawling into their tent and commanding the kids to "Chase them away".

As the coons feasted, the brother and his two younger sisters gave a blow-by-blow account. They were just like sportscasters, and the ladies lamented each call.

"They finished the chicken, mom."

"Oh, my God." came the voices from the tent.

"Grandma, they're eating your cake!"

And so it went.

Shortly after the drama ended we ate our refried beans and limp carrot sticks, and the raccoons ignored us completely.

"You know, there's something to be said for keeping it simple," I mused.