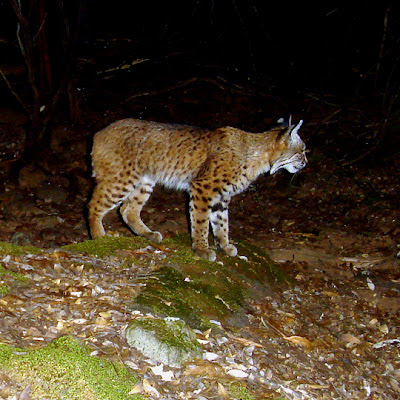 In seven months this is the only bobcat that visited the mossy rock -- at least when the camera was in operation. It passed by a week ago at 2:50 AM. That raised my species count at the mossy rock to 19.

It is the fifth bobcat I have captured with camera trap over a period of 32 months. As I mentioned before, I think the pumas may keep their numbers in check.

My new neighbors, who now own the mossy rock and this 12 acre parcel, and who will soon build a house, did a little bushwhacking on their property. I captured their images at another camera trap near the mossy rock, and decided to pull the two cameras until I meet them, and receive official permission to camera trap there.

Meanwhile, I am working myself up to make the long trek into the canyon where I'll make a creekside set. I have been accused of acting like "mad dogs and Englishmen" before, but I'd prefer to do this AFTER the temperature drops below the 100s.
Posted by Camera Trap Codger at 12:03 PM

Hey Chris you ole codger
Great photo of Bobcat.
Would you share the list of the other species caught on camera at "mossy rock"? I remember you from my days at S.F.State in 60"s. I was very impressed with your artistic talent.

Well I spoke too soon and then read your list which is very impressive.
It appears that you won't grow any moss.
Nice work and fun as well.

Hey Owlman,
Glad to encounter another 39-year-old (LOL) from SF State days. We'll I set a cam on the river today, so let's see what shows up down there.

Meanwhile stay posted. I got some eat stuff off the cams this weekend.