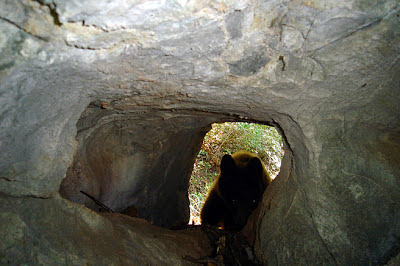 Four hours after I left the set, a wood rat climbed into the tunnel and triggered three pictures, only one of which contained its out-of-focus image. The visit was brief, to check out the new smells.

Then Scruffy showed up the next afternoon at 16:23. She approached from the west side, peered into the tunnel, climbed in and sniffed the corners where the mice were cached. The camera took 9 photos in the space of a minute, but none recorded her eating the mice or sniffing the scent. And then a surprise. . .she actually turned around in the tunnel to make her exit.

Two hours later she was back again, peering into the tunnel wearing alert ears. 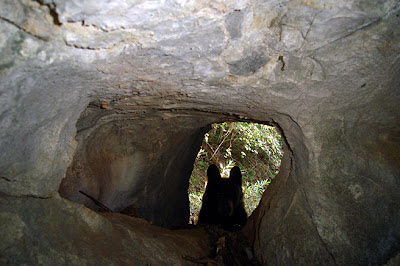 Does this picture stir your genetic memory? Can you imagine sitting around a fire in a cave? Bloated with meat and sucking marrow from a bone. . . when . . . there's a shuffle of leathery paws, and suddenly that bear silhouette is there at the end of the tunnel? Waaaaahh! 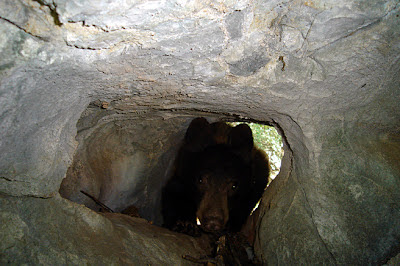 This time she passed through the tunnel from end to end, taking seven pictures in about 30 seconds. 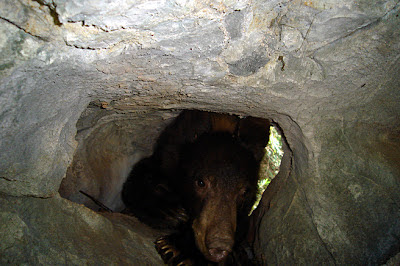 At the end of her passage she squeezed past the camera. 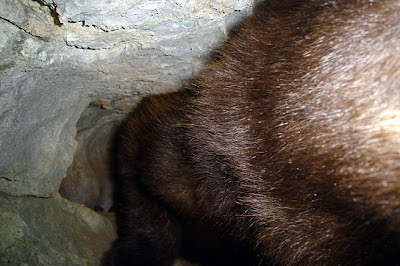 The final picture is of an out-of-focus paw. Scruffy is a gentle bear. If she touched the camera it was hesitant and meek.

I confess that I am very pleased with these pictures. But there were more. The woodrat paid a morning visit in daylight, and then a family of four spotted skunks made three appearances yielding 20 photos.

How interesting it would have been to see those skunks milling about, but the pictures weren't in focus. The camera seems to focus on the trees beyond the tunnel unless a furry body is dead center in the frame. I didn't figure this out till I examined the pictures on the computer screen.

I want pictures of baby skunks!

I left the camera for another round, using egg yolks as bait, but I can only expect more of the same blurry images, unless something big climbs into the tunnel and fills the space like a cave bear.
Posted by Camera Trap Codger at 10:16 AM

That seems a pretty successful set-up! Amazing images as it enters the tunnel.

I'm pleased, but have passed the stage where I do the arm-pumping thing we see done at the tennis court.

My cave man thoughts didn't kick in until I had the pictures up on screen. Then I got the creepy feeling of being cornered by Bruin. This particular Bruin is a scaredy cat -- a couple weeks ago it paid a visit to the plum tree while I was watching a Seinfeld re-run, and it ran like hell before I could open the door. Set up a camera trap, but it never came back.

thank you for keeping this blog up:)