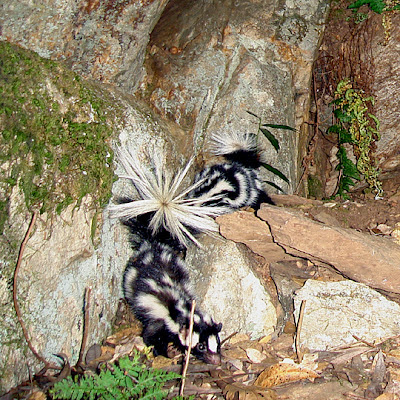 The skunklets have arrived with their mothers.

Sorry I can't offer a better family portrait, but these little skunks don't stay put. Mom is on the rock, and one of the three skunklets is out of sight. 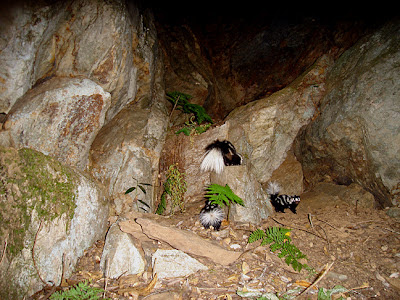 Out of 60 images, only a couple of shots show them horsing around. 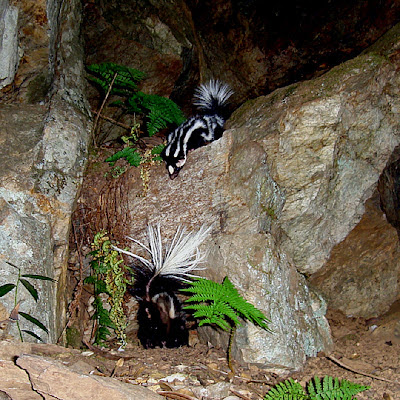 So they are not the best subjects for camera traps. Still, it's newsworthy from the standpoint of natural history.

The cams started to get baby images on June 25th, and I am sure I have 2 families -- one has four skunklets, and the other has three.

They are about three quarters adult size now. As far as I know, Wilfred Crabb's study of spotted skunks, published 63 years ago, is still the main reference on body growth. When I compared these youngsters to his photos of developing skunks, I concluded they are about 2 and a half months old. That would put their birth in mid to late April.

In most mammals the early embryonic stage known as the blastocyst implants itself in the wall of the uterus and continues development. In delayed implantation the embryo floats about in the uterus in suspended animation so to speak. It simply stops developing until it implants at a later date.

Mead found that the eastern populations have a relatively short pregnancy of 50-65 days, and delayed implantation lasts only two-weeks. These findings prompted a re-examination of the spotted skunk's taxonomy, and the former species, Spilogale putorius, was divided into the western species, gracilis, and the eastern species, putorius.

The photos of mother and young tell me that these skunks are probably at the very end of that contentious period of mammalian development called weaning conflict. That is when the youngsters are shifting from a diet of mother's milk to solids. Mother increasingly rejects their attempts to suckle, and the offspring become brazen and insistent. Mom gets stingier with her milk, and in the end the youngsters are forced to eat solid "grown-up food". It's one of those painful experiences of growing up.

The redhead and I witnessed this phenomenon in our daughter and grandchildren. We were amazed at the relentless will of the child who wants breast milk, especially after polishing off a peanut butter sandwich. Forget about clever excuses, rational explanations, and attempts at distraction. They don't work.

The child knows one thing which it sums up in a boisterous demand. "ME ME MILK!"

The name of the game is obvious, to convince the parent that failure to suckle will have dire consequences. And it does. Their crankiness drives you crazy.

Thus we coined the term "crankinpuss" -- the child with the sour expression because it didn't get its way.

"Are you a crankinpuss today?" (softly and sweetly said)

As I said, I think the skunklets have passed the crankinpuss stage. They seem to be having a lot of fun exploring the world. 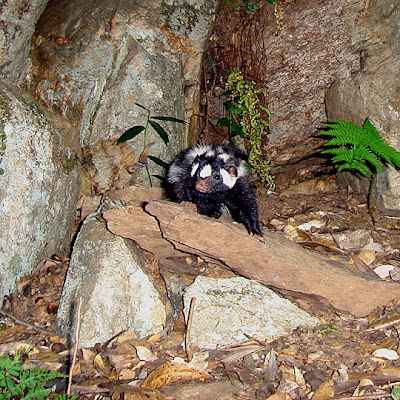 Wow Chris, Where has this blog been hiding? Love it.

Thanks Martin, wish I could offer more on birds, but I've got to upgrade the equipment to do that. Hope you checked out the screech owl posts -- I'm going to zero in on nesting owls this next year.

Those baby skunks are so cute! A couple of years ago I had a family of them denning beneath one of my sheds and I'd go outside around 10 pm and those youngsters would be running all over my yard. I'd take a perch on top of my picnic table and sit there watching them cavorting. One night they got into my garage and for hours I heard banging and clanging. I discovered the little things (mama too) can fit through one inch poultry wire easy as can be. They'd go into the duck pen and eat the eggs night after night.

Your pics are very nice images of some very pretty skunks.