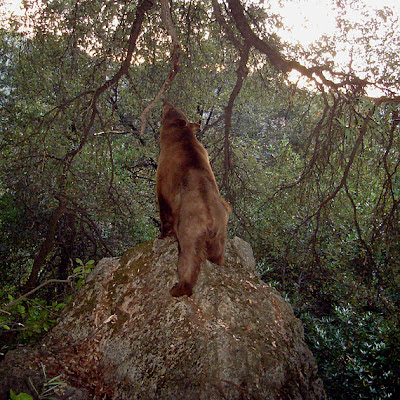 All day long the scent of beaver castoreum wafted upslope, and every night, as the FurFindr wailed pitifully, it wafted downslope . Nothing came for a month. The camera sat there and took two daytime pictures of the rock. False triggers from a puff of warm air. No bird, no squirrel, no nothing!

I was starting to think this was a "dead set", but I wasn't ready to give up.

I removed the FurFindr and deployed it at a new set at the tunnel, and I baited the rock with boiled egg yolk.

Two days later a bear came, but it was interested only in the camera. It took 5 pictures of itself trying to abuse it, and after 43 seconds gave up. The spiked protector discouraged it sufficiently that it paid no attention to the rock. No doubt something, undetected by the sensor, had eaten the egg yolk. Maybe millipedes in the dead of night. 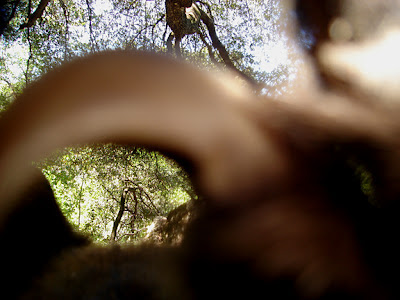 Three days passed and then at 7:00 in the morning a mountain lion mounted the rock. It was there for 15 seconds. I got 2 pictures. 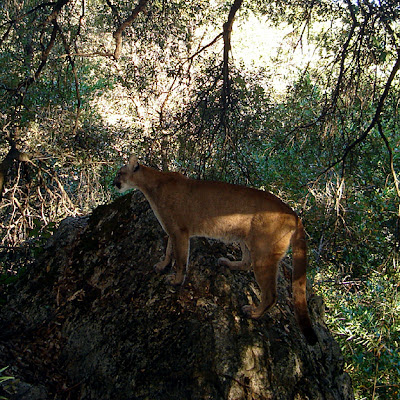 Four days later and the bear was back. It paid the camera a brief visit. 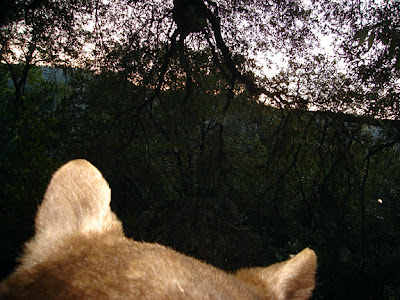 Then it went to the rock. It was a bare-bottomed female (I believe this is Scruffy's mom), and she seemed familiar with the surroundings. 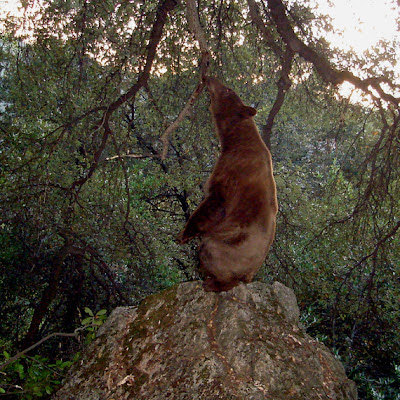 The Furfindr had been gone for two weeks, so why is she looking up at the limbs overhead? Had she visited the rock before, undetected by the infra-red sensor? She sure seems to be looking to where it used to hang.
Posted by Camera Trap Codger at 7:58 AM

The work you do goes good. It keeps me tuned to the summer. Keep sending out the blog. I love it.

Chris
Like a great book your blogs have drawn me in and I can't put (it) down. Your scientific knowledge and sense of humor weaved into your stories are on par with some of the great nature writers of the past. Think about putting this stuff together and you will have a book that would be enjoyed by many.
I would buy several copies as gifts to my friends.

Thanks a lot, SF State guys. You'll be pleased to know that I am expanding my home range, and am starting to cam trap in new areas to target some mammals and birds I haven't yet 'captured'. Once I round out the material I'll get serious about compiling it into a book.

And Owlman, give a holler if you find any horned owl roosts. I've had a long-standing romance with that species since I was a kid. Haven't heard one up here yet.

During the winter and Spring months "our" GHO's
vocalized every night.
Now that the young have fledged they are silent.
Play a recording of their call and perhaps one or more will respond.
I look for a pile of pellets below where I hear them and that will tell you how much time they spend at a particular roost.

I've got my work cut out for me!